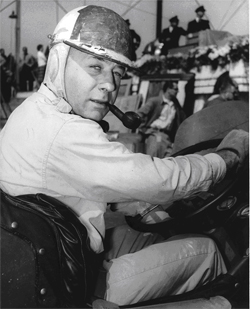 Nationally known race driver, Offenhauser engine builder, and race car restorer, Granville ‘Buster' Warke of Center Valley died Wednesday, February 20, at age 93. A native of Walnutport, PA, Warke left the Lehigh Valley in 1932 for Valley Stream, NY to enroll in the Curtiss-Wright Aviation School to prepare for a career in aviation mechanics and eventually pilot training. On Long Island, Buster met machine shop operator, Milt Marion, and signed on as a crew member for the Duesenberg Marion attempted to qualify for the 1932 Indy ‘500'.

Buster continued to help Marion with his sprint car in 1932 and 1933. In '34 Buster met Walt Killinger of Denver, CO and started pitting for his sprint car at eastern tracks. Ben Shaw was Killinger's driver in 1935 and when he left to drive the famous John Strupp Miller, Buster was in the right spot at the right time and got the ride in a quality sprint car. Buster won several heats in the Killinger car and ran third and fourth in features in Atlanta, GA in July '35. When Killinger returned to Denver, Buster had the experience needed to attract quality rides on the east coast.

In '36 Buster bought a D.O. Crager from Charlie Worley and campaigned the car with Frank McGurk at the wheel and did another mechanic stint for John Bagley with Tony Willman and Frankie Beeder as the drivers. During the 1937 season Buster again returned to driving for a number of owners, including John Liss, Hal Cole, Mike Busch, and Fred Peters. In 1938 Buster drove a Miller Marine for Peters at Allentown, PA and was involved in Frankie Beeder's fatal crash during the heat races when Beeder drove his Ted Nyquist McDowell over Buster's right front in extremely dusty conditions off turn four and flipped, sustaining fatal injuries. Showering after the races, Buster found tire marks on his shoulder where Mike Little had also climbed over the Peters car in the same melee. 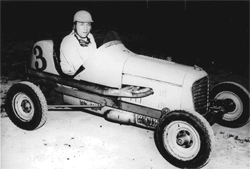 Buster also ran midgets for Savannah, GA's Major Hawley at the Nutley, NJ Velodrome (above) and purchased his own car in 1938 to make the trip to Buenos Aires, Argentina for a winter of midget racing with a contingent of stars, including Duane Carter, Ted Hartley, Oscar ‘Cannonball' Ridlon, Bill Morrissey, Mike Joseph, Roscoe ‘Pappy' Hough and others. Returning to the United States in February of 1939, another winter midget expedition to South Africa was planned for 1939, but was cancelled because of the escalation of World War II.

Buster spent the war years in the U.S. Army as a rifleman, almost getting transferred to an aviation unit in North Africa before the Army saw the folly of actually assigning a trained airplane mechanic to such a unit. Buster also served in Sicily, Italy, Sardinia, Corsica, France, Germany, and Belgium with E Company, 18th Regiment, 1st Division (The Big Red One), winning the Bronze Star.

Upon his return to the states after World War II, Buster drove Jimmy Wilburn's sprint car with the International Motor Contest Assn. (IMCA) throughout the mid-west during the 1946 season before returning home to Pennsylvania.

In 1957, Buster was the chief mechanic for the Ed Stone sprinter in which Bill ‘Cotter Pin' Randall won the USAC Eastern Sprint Car Championship. The season-long reliability of the Stone Offy was paramount in securing the championship as Randall won the title without a feature win.

Buster served as chief mechanic for several Indianapolis teams in the 1950's and 1960's and made the trip to Monza, Italy in 1958 with the Amos-Sclavi team with Monaco Grand Prix winner, Maurice Trintignant, and Indy rookie, A.J. Foyt, as drivers. The team finished sixth in the race won by Jim Rathmann.

Buster's decades of experience with Offenhauser engines made him one of the premier restorers of vintage race cars, especially Indy roadsters. In May, 2004 Buster was the Grand Marshall of the vintage race car celebration at New Hampshire Motor Speedway and made the trip to Knoxville, IA on June 3, 2006 to be inducted into the National Sprint Car Hall of Fame. He was pre-deceased by his wife, Ruby, in 2003.

A memorial service will be held at the Weber Funeral Home, 1619 Hamilton Street, Allentown, PA at 1 p.m. on Tuesday, February 26, 2008 with a calling hour starting at noon.