As the calendar flipped to 1959, the era of racing on the sand at Daytona Beach ended when Bill France threw open the gates of the two-and-a-half mile high banked paved Daytona International Speedway. As the NASCAR drivers prepared for their inaugural Daytona '500', working toward Cotton Owens' fast-time qualifying speed of 143.198 mph, NASCAR and Indy vet, Marshall Teague, and his car owner, Chapman Root set their sights on the world closed-course speed record of 176.818 mph, set by Tony Bettenhausen at Monza, Italy during the 'Race of Two Worlds' Indy car appearance there on June 29, 1957. 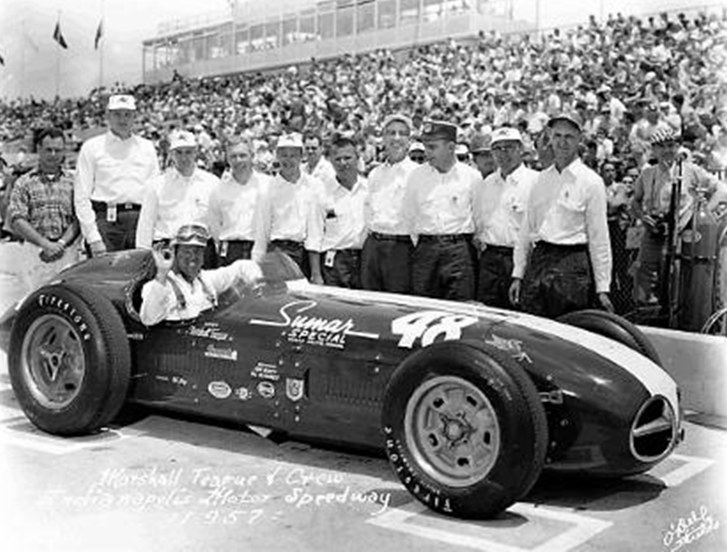 On February 9th Teague reached 171.821 mph at the wheel of Root's Sumar Streamliner, the same Kurtis-Kraft roadster which carried Jimmy Daywalt to rookie honors at Indy in 1955, but now fitted with an airplane-type canopy to enclose the driver's compartment and aerodynamic fenders over all four wheels to make the car 'slippery' enough to challenge the closed course record.

Two days later, Teague made another record attempt, but spun in turn three, flipped the car at least five times, and was thrown out of the car, seat and all. The car was demolished and Teague died instantly.

In order to insure a full field for the inaugural event at Daytona on Sunday, 2/22, both sedans from the Grand National division and cars from NASCAR's convertible division were permitted to compete.  Bob Welborn claimed the pole by winning the 100-mile qualifier for the sedans with Shorty Rollins, the winner of the convertible division qualifier, starting outside. 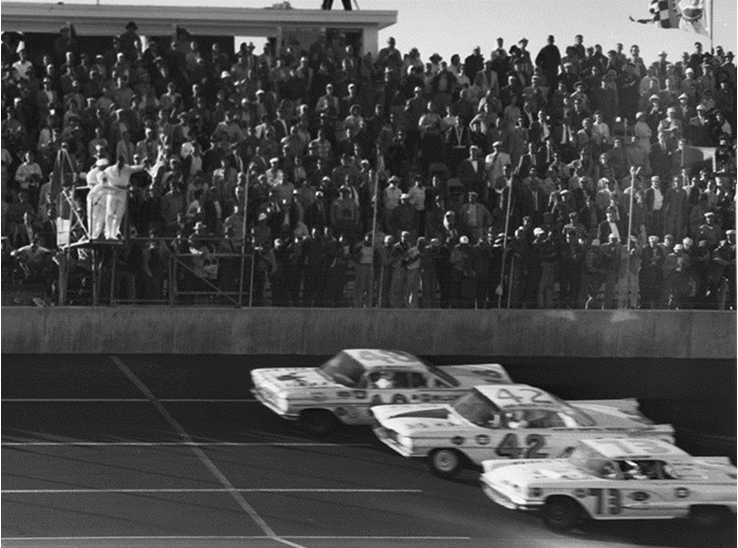 At the finish, Lee Petty in an Oldsmobile won by half a fender over the T-Bird of Johnny Beauchamp and the crowd of 41, 921 went wild.  Charlie Griffith and Cotton Owens, both in Pontiacs, were one lap back, and Joe Weatherly kept his Chevrolet ahead of the leaders to claim fifth place, also completing 199 laps. 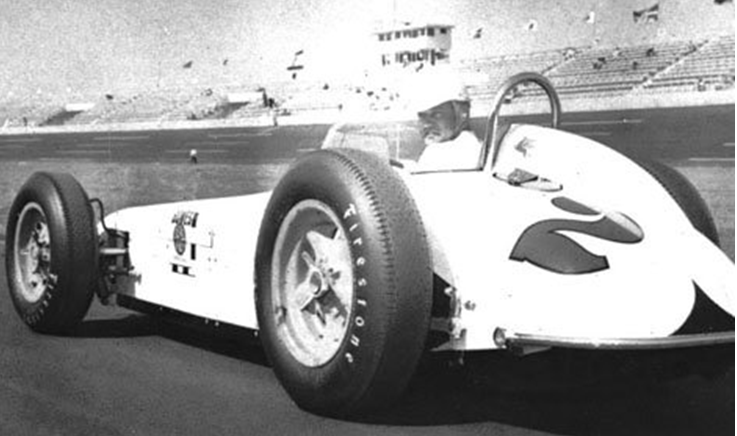 Six weeks later the stars and cars of the USAC championship car series arrived in town for a pair of 100-mile events with only the first paying points toward the national championship. Officials restricted the length of the events, unsure of the effects the dizzying speeds expected might have on the drivers.

George Amick, just hired by the Bowes Seal Fast team after the loss of Jimmy Reece at Trenton, NJ at the end of the '58 season, qualified his Quin Epperly-built roadster more than 33 mph faster than the stock car record, posting a stunning 176.887 mph lap to bring the closed course world's record back to the U.S.  Unfortunately, Amick qualified on the second day of time trials and would start eighth in the first event.

At the green, Jim Rathmann in the Simoniz #16 bolted from second to take command from his brother, Dick.  Rodger Ward guided the Leader Card Offy #5 to second, but had nothing for the leader.  On the final lap Amick pulled out of the draft off turn two to pass Bob Christie for third, but lost the back end and tagged the wall.  The Bowes car began flipping and landed right-side up in the infield.  The front axle had been ripped away, but more importantly the 1957 midget Turkey Night winner and '58 Indy Rookie of the Year sustained devastating injuries which proved fatal.

Jim Rathmann also won the second USAC event, cut to 50 miles because of the delay in dealing with the Amick crash.  The race paid no points and half money.  The championship cars never returned to Daytona.