For the 1961 season the United States Auto Club abandoned the practice of its first five years as a sanctioning body (and the practice of AAA dating back to 1933) of awarding separate Mid-West and Eastern sprint car championships.  The schedules for both circuits occasionally showed either an overabundance of or too few events and occasionally races were booked or rainouts rescheduled against dates for the other circuit. 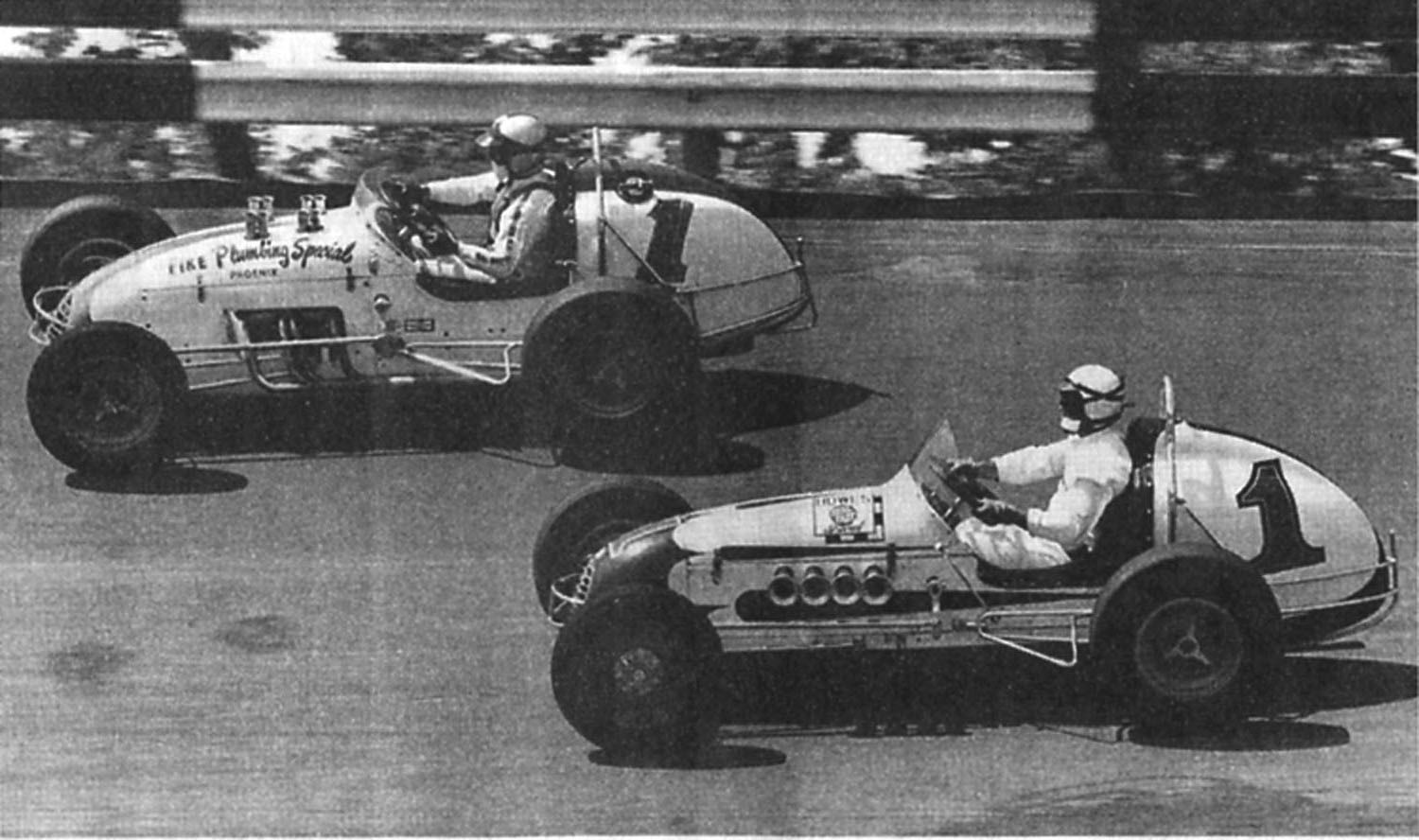 Eastern Champion, Tommy Hinnershitz, powers past USAC's Mid-Western Champ, Don Branson, in a 1960 match race at Reading.  Two #1 cars and drivers on the same track was a rarity and savvy promoters energized their hard-core fans with it.

Most of the privately owned tracks made the transition to the unified circuit seamlessly, but some of the county and state fairs, once a staple of big time sprint car racing, hung on to their dates by a thread.  In the past they filled their stands for their afternoon of sprint car racing, often despite low car counts with only a few drivers with 'household names'.  To the fairs a full grandstand was a full grandstand and increasing the quality of the field while at the same time increasing their costs for the event, didn't make any business sense.  Some fairs bundled two or three USAC events at some cost savings per event to give their patrons a view of USAC midgets and multiple USAC sprint car shows.  These mid-week shows were well received by the racers, but often didn't fill the stands and the fair's auto racing profits dipped even further.

In 1961 the new USAC sprint car circuit was a three-way battle between '61 Indy winner, A.J. Foyt in his venerable Offy and the Chevy twins of Parnelli Jones and Jim Hurtubise.  Foyt (twice at Reading & Salem, Indy Raceway Park dirt, Lancaster, NY Fair) and Hurtubise (twice at Terre Haute & Langhorne, Allentown, and Ascot) posted six wins each, but Jones took nine checkers (three at IRP dirt, including a title saving appearance in Wally Meskowski's sprinter in October, New Bremen and Salem twice, and singles at Dayton and Williams Grove.  Roger McCluskey (Williams. Grove), Jim Hemmings (Salem), and Elmer George (DuQuoin mile) were the only others to post wins.  Twenty-four races were run, coast to coast, and the fans loved it.

The Allentown Fair remained a part of the USAC national series through the 1966 season, even double-dipping in 1965, hoping to make the decision a financial winner.  However, for 1967 and 1968 the fair board signed on with the International Motor Contest Assn. to present two races each year at reduced purses.  The board's replacing of the dirt surface with all-weather cinders to appease the horsemen's assn. trotters and pacers ended sprint car racing at the Allentown Fair.  Only the 1976 SMRC midget race won by Ronnie Dunstan would be added to the final history of the Allentown half mile.