Let's roll the clock back eighty years to visit the 1942 midget season.  Wait a minute, wasn't auto racing curtailed by government mandate during WWII?  True, but auto racing was not stopped until July 1942.

Despite the Japanese attack on Pearl Harbor on December 7, 1941, and the formal declaration of war the following day, racing was scheduled and races were held.  The indoor series on the 1/7 mile wooden track designed by Bill Heiserman at the Bronx Coliseum resumed on January 4th with Al Duffy, Bill Schindler, and Ted Tappett taking the first three races.

Tappett won the April 5 feature to take the points lead but was inducted into the Army after the event to leave Dutch Schaefer and Dave Randolph to battle for the crown on the April 26 finale.  Randolph scored the popular win over Schaefer, Ray Nestor, and Andy Furci to claim the title.  Incredibly, Randolph had competed in the AAA sprint car show at Reading, PA in one of Ted Horn's team cars that afternoon, then jumped on his motorcycle to speed to the Coliseum for the evening's midget event.  Randolph, Tappett, and Schaefer won three indoor events with Len Duncan and Mike Joseph taking two.  Single wins were recorded by Duffy, Schindler, Nestor, and Al Cobb.

When AAA suspended all racing activity in late February 1942, their withdrawal left the door open for eastern promoters Jack Kochman and 'Red' Crise to form an independent sanctioning body for their own midget promotions at Dorney Park, National Stadium in Philly, West Lanham, MD, Buffalo Civic Stadium, and Union, NJ.

At the end of 1941 Allentown midget owner, Pop Leibensberger, sold his entire midget operation to Earl Whitehouse, owner, since 1938, of the Whitehouse Inn, located on the southwest corner of Mechanicsville Road and PA 145, north of Allentown on 7th Street.  Included in the sale were the Gordon Racing Team cars plus the services of drivers George Fonder and Charlie Miller and Elto outboard engine whiz, 'Buttercup' Pierce.

After two rainouts to start the season, Charlie Miller in the Whitehouse Elto won four races to take the Dorney Park title.  Other winners were Larry Bloomer, Fonder, Diego Toran, and Johnny Ritter.

Allentown's Leo 'Shorty' McAndrew was the big winner on the fifth mile paved oval at West Lanham, MD, and claimed the track championship as well.

At the Civic Stadium in Buffalo Pierson won the opener over Bloomer and Colkitt with McAndrew taking the June 4 race in his Ken Hickey V8-60 as Colkitt and Lloyd Christopher were in the money in Pappy Hough's 'Little Pigs'.  All cars were protested, town down, and passed the inspection with flying colors.  Bloomer won the June 18 event over Colkitt and Reginald 'Speed' McFee.  Buffalo driver, Frank Newman, was fatally injured during this event.

McAndrew scored his second win of the season on July 2 over Bloomer and Pierson before Charlie Miller led Bloomer and Ken Dadswell to the checkers a week later.  On the 16th, Pierson won again over Miller and Elmer Sefcik.  In the penultimate event, Sefcik scored ahead of McAndrew and Dadswell before Dave Randolph claimed the finale over Bloomer and McFee.

George Fonder was strong at Union, NJ, and easily won the track championship before all racing concluded at the end of July.

In March of 1942, the famous Nutley Velodrome was dismantled. Built-in 1935 to revive bicycle racing, midgets moved into the wooden high banks in 1938 and produced absolutely stirring racing.  Paul Russo of Chicago won the opener and the '38 title and Detroit's Johnny Ritter was the '39 champ.  NJ drivers Charlie Helliker and Henry Guerand, plus California racer Karl Hattel were fatally injured during the two-year run before the Nutley Town Council canceled the facility's permits.  The smell of castor oil and burning rubber, the sights of colorful midgets speeding from arc light to arc light around the high-banked velodrome, and the nail-biting excitement of it all could never be duplicated. 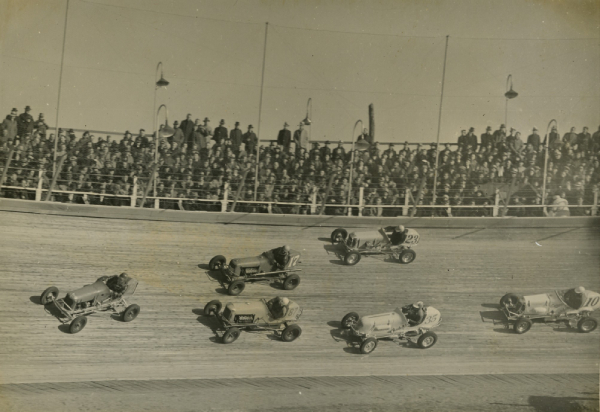