One of the many companies to produce quarter and half midgets during the 1950’s was the Moss MidJET Sales Corporation, 192 E. Beach Avenue, Inglewood, CA. Moss produced eyecatching quarter midget and half midget versions for drivers from age 3 to adult. These sharp cars utilized positive rack and pinion steering, 3 H.P. Continental engines, a 1” diameter rear axle running in sealed self-aligning ball bearings, friction shocks, 50 3/8” wheelbase, 34” tread, with 6” diameter front and rear wheels and tires. Bodies were one-piece heavy fiberglass with a removable tail cone.

On display at the EARHS showroom are examples of both a 1957 Moss quarter midget and a 1958 Moss half midget owned by member Paul Weisel of Orefield, PA. The quarter midget features original mag wheels with asphalt tires and was campaigned in the acramento, CA area. It was purchased in original condition from Bruce Risley of Rancho Cordova, CA in 2000.

The half midget was purchased at auction in January, 2006 and received a complete transformation in the shops of Bob Howe in Lititz, PA. The restoration was recently completed and it is a wonderful example of the 1958 version of the Moss half midget. The two cars are on display next to each other and the differences between the quarter and half midgets are striking. Cockpit size for the Moss half midgets easily accommodates most adults and the half midget features the Moss header pipe as optional equipment. 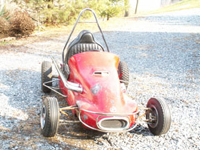 Moss half midget before resoration 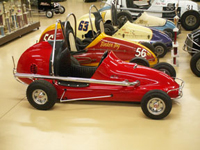 Moss half midget after restoration