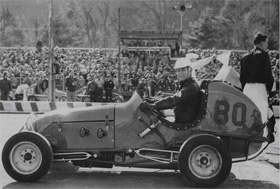 First bitten by the racing bug after witnessing a midget race at the Nutley, NJ Velodrome in 1939, Nick Fornoro decided to attend a midget driver training school run by Dee Taylor with veteran drivers Lew Volk and George Fonder as instructors at Thompson Stadium in Stapleton, Staten Island, NY in 1947. Fornoro won the “graduation ceremony”, a novice event at Hinchliffe Stadium in Paterson, NJ and was able to pick up several rides during the summer of 1947 and during the winter series at Kingsbridge Armory in the Bronx, NY. 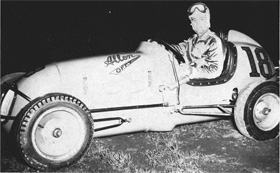 Early performances impressed legendary midget owner, Roscoe, "Pappy" Hough, enough to offer Nick a ride on the ARDC circuit. Races seven nights a week, from Candlelite Stadium in Bridgeport, CT, where Nick won his first feature event in the Bert Lundgren V8-60 after his Hough Offy suffered mechanical problems, to Civic Stadium in Buffalo, to Bone Stadium in West Pittston, PA, to West Haven, CT, to Cherry Park in Avon, CT, and fair dates far and wide, provided Nick with a tremendous amount of experience and a 15 th place finish in the 1948 ARDC point standings.

Nick moved to a car owned by Bill Schindler to start the 1949 campaign, but eventually found a home in the Offy midget, built, maintained, and owned by Eddie Allen. Fornoro won twelve main events during the 1949 season, including a 75-lapper at Yellow Jacket Speedway in Philadelphia in his first appearance at the track, to place fifth in ARDC points. 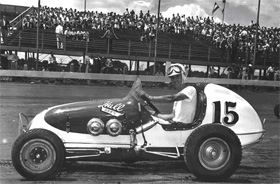 In 1950, Nick Fornoro won six features and amassed 4,737 points to capture the ARDC driving championship and the car owners championship for now ARDC president, Eddie Allen. Although Nick's 1950 season came to an early end after breaking his shoulder when he flipped Ed Bourgnon's cycle at Freeport, NY on September 8th , he had already scored enough points to clinch the championship. The Eddie Allen / Nick Fornoro combo also became the first NASCAR midget division champions in 1953. 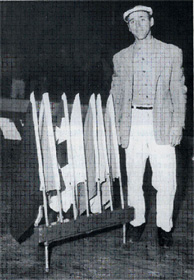 Nick continued to compete with ARDC, winning races in both TQs and midgets, and also drove AAA sprint cars until 1956. Nick Fornoro won the ‘56 ARDC opener at Old Dominion Speedway in Manassas, VA, but by mid-season he retired as a race driver to devote time to his wife and two sons.

Nick's sudden retirement brought an offer from ARDC president, Ed “Dutch” Schaefer to become the ARDC starter. The night after his retirement as a driver, Nick picked up the silks and began his career as a starter. From Nick's many years as a driver he knew all the tricks of the trade and used his experience to control the event from the starter's stand. Nick knew the dangers of his sport and was the first to take the rookies aside to make sure they knew what was expected of them during an event. He also possessed the experience and respect to take the veterans to task when they overstepped their bounds. 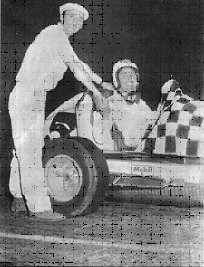 A dapper Nick Fornoro congratulates Al Herman after a 6-8-59 ARDC win at Old Bridge , NJ in the Harry Hespell Offy #5

Nick's showmanship and experience caused him to be in demand as a starter throughout the east. USAC used Fornoro as their starter when their midgets, sprint cars, and champ cars headed east. Add the busy ARDC dates and a winter of indoor TQ midget action, Nick Fornoro's talents as a starter were in demand year-round. When Championship Auto Racing Teams gained control of championship car racing, Nick Fornoro became their starter for all events except the Indianapolis 500. Sadly, the prize that had eluded him as a driver would also be denied as a starter.

Nick Fornoro, the champion midget racer, is ultimately best remembered as one of the premier starters of all time. From 1956 until his retirement at the end of the 1992 season, Nick brought many refinements to the art of starting races. From his natty attire of white pants and eye-catching blazer to his use of two checkered flags, waived cross-handed, to finish a race, Nick left an indelible mark as a race official. While the fans saw these exterior trademarks, Nick Fornoro is best remembered by the drivers of the race cars he presided over as an official who always kept the safety of the competitors foremost in mind. While amid the on-track chaos present in every event, drivers were secure in the thought the starter was paying attention and looking out for them.

In January of 2003 Nick Fornoro served as the honorary starter for the indoor TQ midget races in Atlantic City, NJ, a position he held many times over his career. As he shared the starter's stand with Warren Alston, attired in his trademark white pants and colorful jacket, he brought many a smile among veteran fans and competitors alike as he intently looked over the field in turn four. Nick pointed the furled caution flag with his left hand to magically tidy up the lineup as he had done so many times before, while holding the furled green behind his right leg. As the field reached a crescendo, Nick arched his back and brought the furled green flag along his right side to majestically unfurl it at shoulder level, twirling it above his head to start his final event. If you hadn't seen this take place before Atlantic City in 2003, I hope you were there!

Editors note: Nick Fornoro, Sr. passed away on 9-27-07. He will be missed every time open wheel race cars take to the track. RIP Good Friend.