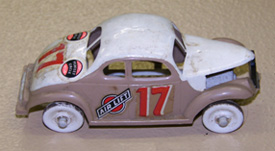 "The little plastic stock car" is the kid's toy of the 1950s and 1960s which may have shaped the lives of more young men in the northeast than any other item of their youth. Long after the weekend spectacle of color, noise, flying dirt, and distinctive odor of stock car racing had faded into mundane weekday existence, this simple little toy made dreamers of the day of thousands of little boys.

T. E. Lawrence, known to most as the British military officer of World War I, “ Lawrence of Arabia ”, wrote “All men dream; but not equally. Those who dream by night in the dusty recesses of their minds, wake in the day to find that it is vanity; but the dreamers of the day are dangerous men, for they act their dream with open eyes, to make it possible.” Untold numbers of young boys used these toys to rehearse their futures as race drivers, car owners, and mechanics. Future driving techniques, crashes, and victories were orchestrated by youngsters on their front porch, on their sidewalk, or on impromptu dirt or gravel speedways in the back yard. Boys could relive the exploits of their speedway favorites with their collections of “little plastic stock cars” – any day could become the weekend at a moment's notice. 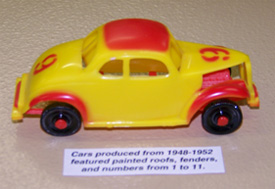 In 1948 a Chicago based company (If you know the name of this company, please contact us!) began making 1/43-scale styrene plastic replicas of 1937 Ford coupe stock cars. These cars were not 1937 Fords modified to resemble the stock cars of the day, they were detailed race car replicas with shaved fenders, sans hood sides, with front and rear racing bumpers and without the big chrome grilles which made '37 Fords unique. Several colors were available and masks were used to paint roofs and fenders contrasting colors. Mask-painted numbers, between 1 and 11, also gave each car its own identity. Flathead engines, transmissions, running boards, and other body details made the little racers extremely correct replicas of their steel big brothers, who were taking over oval tracks from coast to coast.

The company's marketing strategy of selling these little racers through chains of 5 & 10 cent stores, either individually or in sets of ten, eventually fell well short of the mark. Despite their good intentions the cars were destined to fall into obscurity by 1953.

Enter east coast speedway concessionaire, Al Otto, who managed a thriving racing souvenir business, centered on Saturday nights at Flemington , NJ , but venturing to a number of other racing hot-beds including, Old Bridge , Dover , and Long Branch in NJ and Nazareth , PA. In addition to selling black and white pictures of noted photographers, Ace Lane , John Reilly, and Dave Innes, Al Otto catered to the kids and knew “the little plastic stock car” was a natural to boost sales on Saturday night. 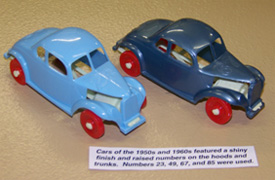 In 1953 Al Otto purchased the molds and brought them to New Jersey . In addition to the four molds, Al also received the entire car and parts inventory of the Chicago company and all the boxes of the initial manufacturer. Al immediately began production of the cars from his home in Maplewood, NJ, hiring local teenagers to trim off excess plastic from the molds, assemble the cars, and peen the wheels.

Mask painting of the cars was discontinued, perhaps due to objections from Al's wife, Jean, and numbers were cut into the hoods and trunks on each of the four molds. Numbers 23, 49, 67, and 85 were used, but today there is no explanation of why these numbers were chosen. Many young collectors sanded off these raised numbers, applied their own paint, decals, and lettering, and made replicas of the coupes of their Saturday night heroes.

Cars produced during the 1950s and 1960s came in various colors. In fact, some very interesting colors appeared during color changeovers. Orange cars were the product of moving from yellow to red coupes and several interesting pastels were the product of using recycled plastic from previous runs. Some cars produced in this era became fairly brittle when recycled plastic was reused several times.

Al Otto was the brother of noted race promoter, Ed Otto. As a result of his many contacts in the racing community his “little plastic stock cars” were sold at concession stands throughout Pennsylvania , New Jersey , New York , at many tracks in New England, as far south as Maryland and Virginia , and west to Ohio . Apparently cars were also sold wholesale to a number of companies, who sold them unassembled, in the original individual boxes, for 10 cents each. These boxes were grey cardboard with drawings of the car on at least two sides. It is also possible cars were traded to cover production costs with a number of plastic companies during the Otto era. Many race fans throughout the country recall seeing these cars at concession stands in their youth, but the recurring information in their stories is a childhood in the northeast. 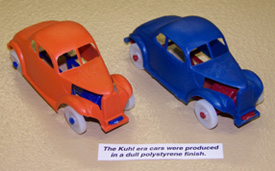 Al Otto continued to have these cars produced into the 1970s, but the molds were inactive for approximately seven years at the time of his death in 1979. In 1982, Rick Kuhl, son of Flemington , NJ promoter, Paul Kuhl, persuaded Otto's widow to sell him the molds with the promise of a 25 cent per car royalty for each car sold at the Flemington Speedway souvenir stand. Rick was a fan of these cars as a youngster and was personally committed to their resurrection. The Kuhl Corporation also had a plastics company under its commercial umbrella, which produced egg cartons and other polystyrene products for the Kuhl Corporation's poultry and egg business. Thus, in-house production of the cars was possible.

The cars returned to production in 1983, but the molds had become rusted and pitted during their years of inactivity. The Kuhl era cars were produced in a dull polystyrene finish which hid many of the flaws present in the original molds. Despite their slightly changed appearance, the cars were again a big hit with the youngsters and continued in production until 1999. In 2000, Flemington Speedway was closed to make way for commercial development. 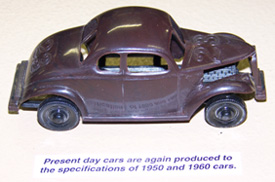 In 2002 long-time stock car devotees, Bob Wagner of Wharton, NJ and Jim Remaley of Stroudsburg , PA purchased the molds from Rick Kuhl and began work to refurbish them. More than five months of tedious work with jeweler's files and a die polisher brought the molds back to their original condition and today cars are produced in the original shiny styrene plastic form made famous in the Otto era. Wagner and Remaley are also able to hand sand, buff, and, by using the original paint mask, paint the cars as they appeared during the Chicago years. Modern paint matching technology is used to recreate the original colors in the production plastics used today.

Now that the coupes of the past have been preserved, Bob Wagner, always a “dreamer of the day”, grafted plastic to an original coupe body to create the famed 1937 Ford flatback, 2-door sedan body style, also a popular choice of modified stock car racers. The original mold produced approximately forty sedan bodies before suffering terminal failure. A new silicone has been ordered and another sedan mold will be constructed in the near future to provide fans of the “little plastic stock car” an opportunity to recreate the sedans of the heroes of the 1950s and 1960s.

If you have any information regarding the history of these cars, particularly information about the original Chicago manufacturer, please contact us.