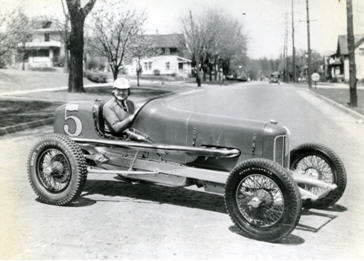 When Gus Schrader of Cedar Rapids , IA was in the market for a new race car to challenge the tough International Motor Contest Assn. (IMCA) mid-west fair circuit in 1932, he chose nationally renowned car builder Harry A. Miller of Los Angeles, CA to fabricate his Miller powered 'big car'.

Before Schrader and his west coast beauty ran roughshod over the mid-west competition, he made two trips to Langhorne with the car in '32 to support fair promoter, Ralph 'Pappy' Hankinson.

Schrader used the AAA sanctioned 50-lap sprint on the mile dirt at Langhorne , PA on May 7, 1932 as a tune-up for his new mount. Gus scorched the 'Big Left Turn' with a 36.20 second run in time-trials to set a new track record at 99.447 mph, just short of the revered 100 mph mark. However, mechanical gremlins in a preliminary event ended his effort early.

Schrader returned to Langhorne for another AAA 50-lapper on August 13, 1932. During the heat race, Schrader sustained a shoulder injury while finishing second to 'Wild' Bill Cummings, the winner of the May feature event. Schrader turned his car over to Mauri Rose, who won the main event in a record time of 34:31 for the fifty miles. Rose would later win the Indianapolis '500' in 1941, 1947, and 1948. Cummings would also become an Indianapolis '500' champion in 1934.

Gus Schrader won more than 100 features with his Miller on the IMCA circuit, which ran events at most of the major half mile fairground tracks throughout the mid-west. Schrader won four consecutive IMCA championships with the car in 1933, 1934, 1935, and 1936.

At the end of the 1936 season, AAA eastern big car champion, Bob Sall, was looking for a new car. Sall remembered the spectacular performance turned in by Mauri Rose in the Schrader Miller and Schrader's four consecutive IMCA championships left little doubt the car was a winner. Sall bought the car for the 1937 season and brought it east to again compete with AAA. 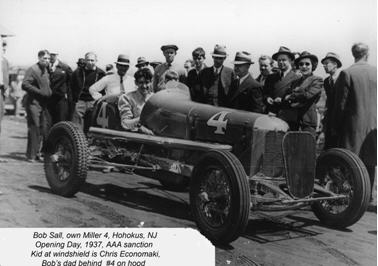 On May 22, 1938, Sall set fast time at the Langhorne dirt mile, tripping the light beam at 35.02 seconds, or 102.798 mph, a new world record. His total dominance of the AAA sanctioned 50-lap main event saw him lap the field, completing the distance in 32:29.09, yet another world record for the distance. 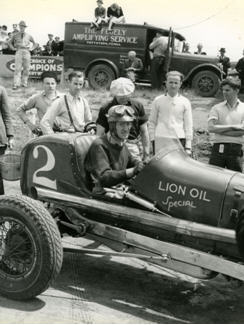 In June, 1938 Sall was injured in a midget crash at Cedarhurst, Long Island . During his recovery Floyd Davis, who would become a co-winner at Indianapolis in 1941 with Mauri Rose, and Tommy Hinnershitz, who would record 104 sprint car feature wins and seven eastern championships, drove Sall's Red Lion Oil Miller at various AAA venues. On August 20, 1938, James 'Billy' Winn, twice a winner at Allentown , was fatally injured driving the Sall Miller during a 100-lap event at Springfield , IL .

Sall returned to the cockpit in 1939 and 1940 winning several events at the Altamont , NY Fairgrounds. At the end of the 1940 season, Sall sold the car to Ted Horn, who was assembling a five car team for competition on the Hankinson fair circuit. The key part of the deal was for Sall to remain as the driver for the 1941 season. 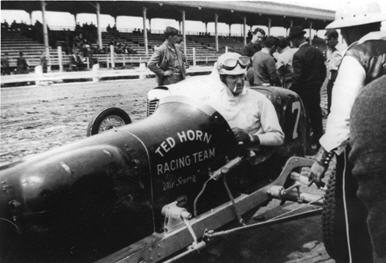 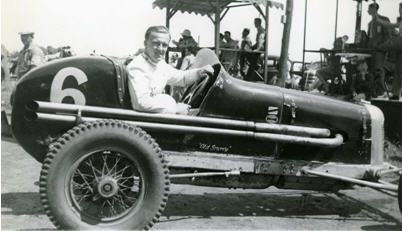 In 1942 the former Gus Schrader Miller began its eleventh season in competition and, in recognition of its service, Ted Horn affectionately dubbed the car 'Old Scurvy'. To compensate for a veteran race car, Horn tapped Bayard Douglas Tewksbury, a Hofstra College grad who had made quite a name for himself in the midgets as 'Dave Randolph', to move into the seat of the #6 sprinter.

When World War II caused the 1942 season to be suspended by the government at the end of July, 'Old Scurvy' went back to Horn's shops at Gasoline Alley in Paterson , NJ for the duration of the war and Randolph joined the U.S. Army Air Corps. The racing world was shocked to hear Randolph died of a heart attack at a stateside air base in 1945 at age 24.

When hostilities ended, racing immediately resumed in August of 1945. Although Ted Horn was ready and won several events in the abbreviated 1945 season, his plans for a five car sprint car team were shelved. The former Schrader – Sall car languished in Paterson until the end of the 1946 season when a former driver from Allentown , PA bought the car from Horn.

George 'Dutch' Culp drove big cars prior to World War II with some level of success, winning the occasional heat and consolation races. Culp was familiar with 'Old Scurvy' and the success the car had in the 1930's with Gus Schrader, Bob Sall, and others. Culp made the deal with Horn and hired Tommy Mattson as his driver for the 1947 season. The car was housed at Zuck's Garage in Allentown , 'Buster'  Warke was hired as the chief mechanic, and a 220 c.i. Offenhauser was later acquired to replace the trusty Miller engine for the 1948 season. 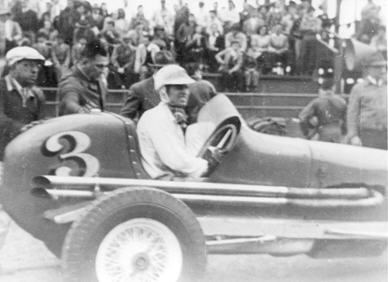 The Mattson – Culp combo finished 2nd in eastern sprint car points at the end of the 1947 season. Their success allowed Culp to place a deuce on the tail of his race car for the 1948 season and encouraged him to upgrade his sprinter. The car was sent to Allentown , PA car builder Hiram Hillegass for a new aluminum body. 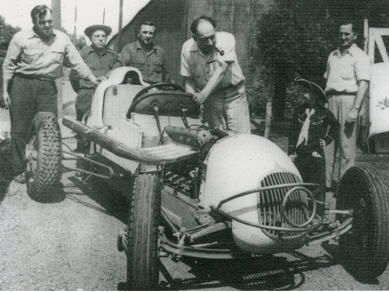 Buster Warke steers the Culp Offy out of Hiram Hillegass' shop in 1948. 'Dutch' Culp is at the tail with the hat. Even Hopalong Cassidy was present for the unveiling! 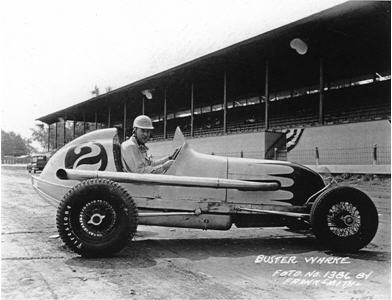 'Buster' Warke drove the Culp entry in 1948 before again taking up the wrenches for Mattson and Bill Holland in the 1949 and 1950 seasons. The 1948 yellow and black livery is significant because it was chosen by Marlin Heller for the car's ultimate restoration in 1980.

To keep pace with his competitors, 'Dutch' Culp decided he needed more than a new body to compete on the tough AAA sprint car circuit. The new lighter Hillegass sprint cars were becoming very popular, so Culp put down a deposit for a new car from the South Allentown raceworks. This decision put a 'for sale' sign on the former Schrader Miller chassis, but Culp retained the relatively new 220 c.i. Offy for his new Hillegass car. 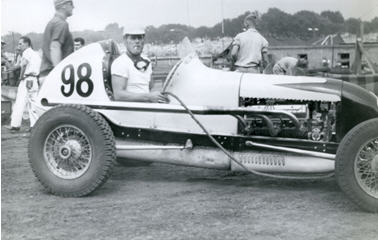 At the end of the 1950 season, Texan Carl Meyers bought the car from 'Dutch' Culp, less engine and took it home to the Lone Star State . Meyers installed a V-8 Olds engine and put Oklahoma tyro, 'Jud' Larson, in the seat for a return to IMCA competition. Meyers kept the car until 1958, but Larson went on to AAA to seek fame and fortune in the national spotlight.

For the 1959 and 1960 seasons, Colorado owner-driver, Earl Kuba purchased the car for competition on the tough IMCA sprint car circuit. 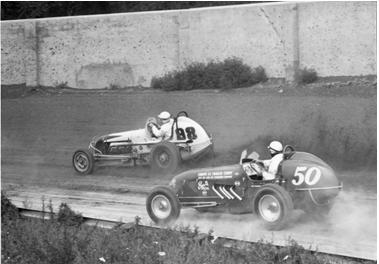 Kuba sold the car to fellow Colorado racer, Tom Vanswearinger, who continued to race the car in the Colorado area during 1961 and 1962.

At the end of the 1962 season Vanswearinger retired from competition and the future of the car became uncertain. Enter former Indianapolis competitor and open cockpit fabricator, Don Edmunds, who was following the USAC midget trail in the Colorado area. When advised of the availability of the car, Edmunds recognized its historical value, bought it, and shipped the car to his home base in Anaheim , CA . With Edmunds' Autoresearch company in full swing, eventually building more than 600 race cars, plans for the restoration of the car remained on hold indefinitely.

In 1980 Jim Etters, well-known Pittsburgh , PA race car parts purveyor, knew Marlin Heller of Dover, PA was interested in finding an east coast car to restore and caught Edmunds in the mood to liquidate his Colorado find. A call to Heller ended with Marlin stuffing a Fed Ex envelope with cash and dispatching it overnight to Etters in California to complete the deal.

'Buster' Warke was very helpful to Heller during the restoration process and Ohio AAA and USAC chief mechanic, Andy Dunlop, built the 220 c.i. Offy for the car. The 1948 livery was chosen as the first year the car ran with the new Hillegass body and to honor the achievements of Culp, Hillegass, and Warke, who were all well respected members of the eastern racing community.

In 2008 Paul Weisel became the tenth owner of this wonderful car and displays it in the showroom of the Eastern Auto Racing Historical Society in Orefield , PA in an area dedicated to the career of 'Buster' Warke.

During its life the Culp Offy has been associated with top names in the sport of sprint car racing. Builder Harry Miller, Gus Schrader, and Tommy Hinnershitz were original inductees into the National Sprint Car Hall of Fame in 1990. Ted Horn and Don Edmunds were inducted in 1991, Bob Sall and 'Jud' Larson in 1992, 'Billy' Winn in 2003, and 'Buster' Warke in 2006. 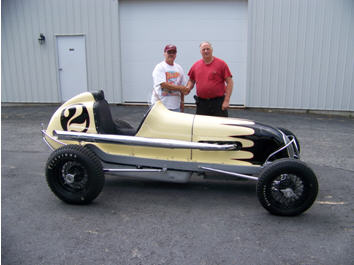