It's always a great day when a race car restoration is completed.  Many hours of tedious work culminate in a restored piece of automotive history often from forty, fifty, or more years ago.  Folks who lived during the era again experience the thrill of the cars of their youth and those who never saw the vehicle in competition get an idea of times gone by.  When the car is one from your personal history, the thrill of its restoration makes the day even more special. 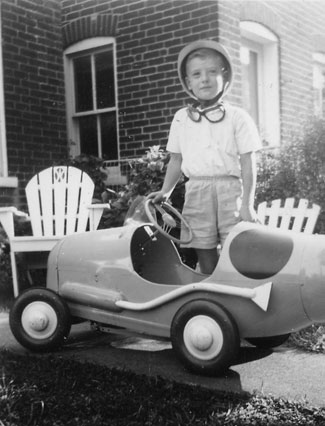 The year was 1952. At four years of age I was already race car crazy.  I had all the Speed Age magazines to date, a gift from my uncle, and, in the company of my parents, was a regular in the grandstands at Dorney Park, the little 1/5 mile asphalt bullring just west of Allentown, PA.  I loved the ‘mighty midgets' and my favorite driver was midget racer Len Duncan.  Although I was also quite happy to attend the stock car events at the ‘Park', the sounds, the smells, and the colors of the midgets at full speed under the arc-lights were my first love.

While accompanying my grandmother on a shopping trip to Hess Brothers department store in Allentown , I spotted the little tan midget pedal car racer on display.  If I ever wanted anything in my childhood, this was ‘it'.

Although I was an only child (and an only grandchild), the car was way too pricey for my parents.  At sixty dollars, this little English-made Tri-ang pedal car was big bucks in 1952.  My grandparents, Oswin and Emma Weisel, were also initially set back by the pricetag, but during my lobbying efforts regarding the pedal car I suggested perhaps we should check at Sears, where the car might be less expensive.

Apparently there was nothing sweeter to a good Pennsylvania Dutchman's ears than to hear his 4 year-old grandson suggest ‘shopping around for the best deal'!  My grandparents bought the car and I proudly drove it out of Hess Brothers and to the family car for the trip home.

For several years I competed almost daily on a sidewalk course alongside my grandparents' grocery store at 10 th & Tilghman Streets in Allentown .  Elapsed time records to complete the course were kept and I drove that pedal car until I simply no longer fit into the driver's seat.  When it was retired, it was put into storage, a revered part of my childhood.

I remained an avid auto racing fan throughout my teenage years and started my stock car career at Dorney Park when I became old enough to get a pit pass at age eighteen.  Even early on I liked to travel and also participated in stock car events at Silver Spring, Lincoln , Anthracite, Reading , and Grandview before I turned twenty-one and became eligible to race open wheel cars (all you youngsters read that statement again – 21 to race a roll bar TQ, midget, or sprint car).

I was never prouder than to run my first TQ race where I was announced in the same lineup as my boyhood hero, Len Duncan.  As a youngster, my father took me to the pits after a midget race at Dorney Park to see Len.  Although he was talking with several adults, Len broke away and spoke with me.  He asked if I was in the stands every week and I replied, ‘Yes.'  When he asked if I could be there in time for warm-ups next week, a nod from my dad confirmed we could.  When Len asked where we sat, ‘Turn 3' was the answer.  Len Duncan then promised to wave to me prior to warm-ups next week – he did and made yet another life-long fan.  Len continued to wave to me every week for the entire season.  When I related this story to him many years later, he broke the news he waved to everyone around the entire track every night during slow laps before warm-ups.  I couldn't have cared less about the others – he waved to ME!

During my early years with the TQs Len Duncan and Nick Fornoro were the two veterans who took the time to offer advice to make me a better driver.  I'm sure Len did it to make me straighter and more civil to be around on the track, but he did take the time to offer important and welcome advice.  Nick Fornoro just wanted the new drivers to be safe.  After moving from the cockpit to the starter's stand with ARDC he took it upon himself to tell new guys what they needed to know.  Roll bar race cars of any size could hurt people and Nick wanted everyone to go home in one piece.  Thank you, Nick.

When Bob Howe of Lititz , PA was available this summer to take on another small car restoration project, I took him my first race car – the little Tri-ang pedal car from my childhood.  After several weeks of unusual restoration challenges, Bob unveiled my pride and joy, transported back to 1952 by his group of restoration specialists.   Be sure to take a look at the car at the EARHS fall open house.