To celebrate the 100th birthday of the Indianapolis '500', officials of the Indianapolis Motor Speedway decided to celebrate the track's storied history by honoring the drivers and mechanics who raced their way to the pinnacle of American auto racing on the short tracks from coast to coast. For the first seventy years at Indianapolis, drivers got their chance at Indy as a result of their prowess on Saturday nights and Sunday afternoons at the wheel of midgets and sprint cars. They raced wheel to wheel on dusty fairground half miles and arc-lit quarter mile paved stadiums and when they were tapped by an Indianapolis car owner to drive in the Memorial Day classic, they brought legions of fans to watch them at 'the Speedway', left countless more glued to their radio on race day to monitor the action, and solidified their bond with their fans by continuing to compete on the short tracks, building an even greater fan base, during the remainder of the racing season. 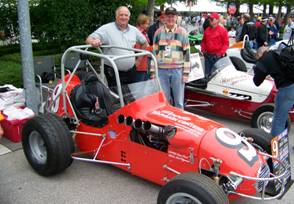 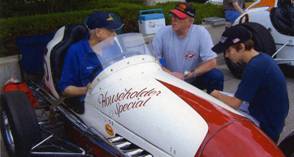 Here he chats with Indiana racing historian Ed Hitze (in car) and his grandson.

IMS was very gracious to invite all living Indy ‘500' drivers to be their guest for the centennial weekend and many veterans took them up on the offer. Saturday, May 28 th , usually a quiet day at the speedway, was chosen to be 'A.J. Foyt Day', with autograph sessions for the field of 33 plus former Indy winners, a special vintage race car show, and free admission to all fans. 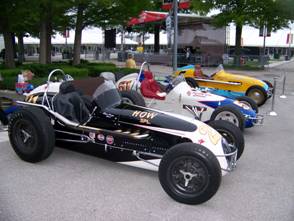 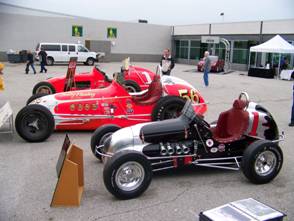 Nineteen invitations to the vintage race car show were extended to midget, sprint, and championship cars with strong ties to Indy ‘500' drivers, with special attention to former winners and record holders. 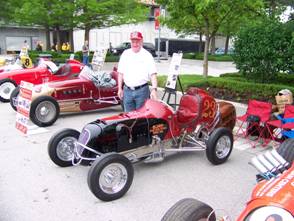 The two sprinters behind are the McNamara Trucking Offy #73 and the Charlie Engle Offy #3 (also famous as #31) often driven by Mike Nazaruk and Larry Crockett respectively.

Of course, meeting old friends at the IMS vintage race car show on May 28 th was great, but making new ones was even better. At mid-afternoon, former AAA midget standout, Neal Carter, and his wife introduced themselves. Pete Trumbauer provided a chair and a bottle of water for Barb and Neal and I started talking 'doodlebug' for the better part of an hour.

At ninety years young, Neal Carter recalled his ten seasons pushing throttles in AAA midget and champ car competition and passing his drivers test at Indy in 1952, although he failed to get the Auto Shippers entry up to speed to make the event. Neal's memory is sharp and it was a great pleasure to hear stories of his days at the wheel of the Jimmy White Offy #5 with teammate, Ralph Pratt as they ran seven nights a week in northern Ohio and southern Michigan, with the occasional trip to the east coast for big AAA purses. 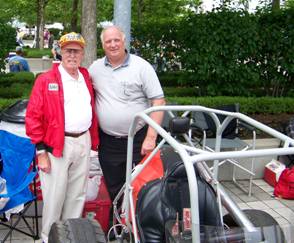 During a casual weekend ride on his Harley-Davidson in 1945, Neal spotted a sign (there were promoters back in the day!) for midget races at the Ft. Miami, OH Speedway. One afternoon listening to the sound of growling Offies and watching midgets spew rooster tails of dirt in the turns was enough to hook another convert to the mighty midgets. Neal put a $20 deposit on a race car for sale at the speedway that day, floated a loan from his mother to 'buy a car' (she was glad to finally get him off that motorcycle, but was less enthusiastic when 'the car' turned out to be a race car), and immediately entered the post-war midget fray. As his talent as a driver developed, he was noticed by car owner, Jimmy White, who was also the promoter of the Ft. Miami race track. To start the 1948 season, Neal was at the wheel of the #5 Jimmy White Offy, paired with Dennis 'Duke' Nalon, already a seasoned professional racer on the national stage. 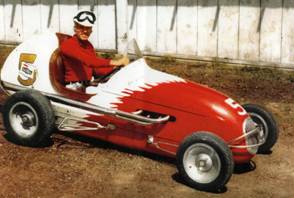 The White team concentrated on AAA dirt track venues, including Detroit's Motor City Speedway, the quarter mile inside the dirt mile at the Milwaukee, WI State Fair, the Rubber Bowl in Akron and Sportsman Park in Bedford, OH (just southeast of Cleveland) before returning for events at White's own promotion at Ft. Miami, OH. When Nalon decided he'd prefer to race more in Michigan, he was replaced by Ralph Pratt as driver of the Jimmy White #1 Offy.

During the 1948, '49, and '50 seasons the White drivers were frequent visitors to the east coast for high dollar events at Hatfield, Langhorne, and Williams Grove and Neal Carter added his name to the list of dirt track winners at Langhorne on Sunday, October 10, 1948, taking the 100-lap AAA Midget National Championship in a record time of 1:03.34.71. Mike Joseph, Ray Knepper, Manuel Ayulo, & Charlie Miller trailed. 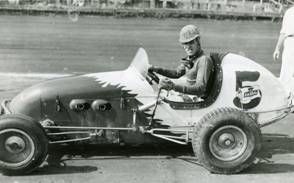 By 1950 Neal had Jimmy White's blessing to pursue a championship car ride and made his debut at Langhorne on June 25 th , driving the #88 for Bill Corley. In August he moved to Milt Marion's Kurtis 2000 #23 and scored a 7 th at Williams Grove, also making the program at Milwaukee, Syracuse, and Detroit, failing to qualify only at Springfield. By October he caught a ride in Joe Shaheen's #39 at Springfield, qualifying 7 th and finishing 2 nd after 100 miles. A 16 th in the Palmer Offy #24 at Sacramento and a 14 th in the Shaheen car after 200 miles at Darlington, SC completed the 1950 campaign. 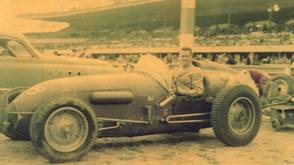 In 1951 Neal moved to the Bill Lutes champ car and maintained his seat in the White midget. After missing the show as the first alternate at Milwaukee, Neal was in the starting lineup at Langhorne, Darlington, Springfield, and Detroit. When Lutes obtained a Kurtis 4000 chassis, Neal came home 14 th at San Jose, CA and notched a pair of 4 th place finishes at Phoenix, AZ and Bay Meadows, CA.

When the promise by Lutes and White to obtain an updated Kurtis roadster for the 1952 Indy ‘500' failed to materialize, Neal secured a ride in the Auto Shippers Kurtis 500A roadster. Unable to crack the field at Indy or Milwaukee, Neal posted a 7 th at Raleigh, NC, 8 th at Williams Grove, and 5 th at Detroit before failing to qualify at DuQuoin and Syracuse. Neal finished the season back in the Lutes Truck Parts entry at Denver and delivered a 7 th place finish. 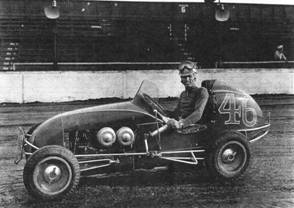 After leaving the White Offy, Neal often drove the Leitenberger Offy #46 on the AAA midget circuit, scoring a convincing win at Motor City Speedway in Detroit in a feature which included all the AAA Carters, Neal, Duane, and Vic (all unrelated – no family here!) In 1951 Neal claimed his third consecutive track championship at Motor City. Add a track championship at Ft. Miami, OH in 1948 and the 1950 AAA Ohio/Michigan midget crown and it's easy to see why Neal was inducted into the National Midget Hall of Fame in 1999. Neal continued on the AAA midget trail until 1955 when he retired from competition to devote time to his family.