By 1962 Allentown event promoter and former race car driver and racing official, Lou Heller, was looking for a new venue to promote indoor midget racing in an effort to extend the racing season through the winter months. Heller had promoted various midget racing events at the Allentown Fair half mile since the 1940s and recently was named to head the Fair’s highly successful annual USAC sprint car events, which anchored the final day of The Great Allentown Fair.

In 1957 the Fair Assn. built Agricultural Hall, a 40,000 square foot, single story exhibition hall on the fairgrounds to house programs and displays during its annual fair. While ‘Ag Hall’ found some additional use during the spring and summer, its winter use was virtually non-existent. The hall property was just what Lou Heller was looking for and the Fair board was thrilled to find a tenant for an extended rental in the dead of winter. Heller immediately proposed a series of indoor events to the Lancaster County based LANCO Micro Midget Racing Ass., who eagerly accepted and viewed the indoor venue as an opportunity to gain national exposure during the traditionally slow winter months.

The Fairgrounds had a number of sets of bleacher seats which were moved into the hall and they shared the area between the main support beams with a 1/10 mile oval laid out on the building’s concrete floor. Build a ‘crash wall’ of ľ “ plywood to keep errant racers out of the crowd, add a few strategically placed traffic cones and presto, an indoor racing facility was born. Even better, the rear extension of the building was adequate for a pit area to shelter the racers and crews from the harsh Pennsylvania weather and provide easy access to the racing surface.

With a 2” x 1 column ad strategically placed in the Saturday edition of the Morning Call newspaper, the LANCO racers feverishly practiced on Saturday afternoon to find the setup for the tricky concrete floor and Lou Heller envisioned an overflow crowd for his indoor promotion. When Lou Heller threw open the doors at 7 pm, a capacity crowd of 1200 plus filled the hall, ready to be treated to some red-hot racing action on a cold November night. Ah, promoting in 1962!

When the throng filed out at the end of the night, they had witnessed an entertaining 10-race micro-midget program, complete with wheel-to-wheel racing, spins, tangles, the ear-piercing staccato of 250 cc motorcycle engines, and a cloud of exhaust fumes which hung over the hall like a summer thunderstorm. The only way to alleviate the fumes was to periodically open the overhead vehicle entrance door on the north side of the building, a practice which torpedoed the coat check business for the evening.

When the final checkered flag flew on November 10th, Ken Hinerdeer notched the open class feature over Sam Yoder, Bob Howe, ARDC veteran Len Duncan, and Bob Wilkey with Walt Witmer taking top honors in the industrial flathead class. Both Illustrated Speedway News and National Speed Sport News published accounts of the races, but the Allentown Morning Call carried not a word. On Monday morning, Lou Heller was at the sports desk, explaining to the editor he was under the impression coverage of the events was part of the deal when he went for the more expensive 2” ad! In following weeks, the Morning Call had a reporter at the races and, although they occasionally mangled a few names, their articles were generally favorable and served to provide additional advertising for the events. Heller kept the 2” ads coming as the cornerstone of an advertising blitz on area fans.

By the third program on Saturday night, November 24th, the pace and intensity of the events had picked up. Racers were becoming accustomed to careening around Ag Hall’s flat floor and the occasional two-wheel bicycling acts produced by the accumulating rubber buildup on the track were taken in stride by the racers, but never failed to excite the crowd. Leigh Earnshaw, Sr. of Morgantown, PA, whose son, Leigh, Jr., would become a 4-time ARDC midget champion in later years, took the entertainment issue to new heights with a one-wheel balancing performance on the backstretch. His acrobatics did not have a perfect ending as his #29 landed on its left side and Leigh suffered a dislocated shoulder.

As the calendar moved to December 1st, crowds still numbered about 1,000 paid and the racing was improving. The LANCO drivers were becoming more adept at indoor racing and the number of cautions per program was substantially reduced. Jerry Hinerdeer added his name to the list of open class winners, leading Bob Wilkey, Ken Hinerdeer, Sam Yoder, and Eddie Remp to the checkers. Lowell Grube took industrial flathead honors over Hen Kramer, Glen Devonshire, and Dick Peterman.

By December 8th, the crowd had decreased to 800 paid and promoter Lou Heller announced the series would be taking a holiday break and would resume on Saturday night, January 8th. Eddie Remp scored the open class feature win, leading Reds Sensenig, Jerry Stover, Sam Yoder, and Bob Howe at the finish. Ed Spotts posted his second industrial flathead win ahead of Vern Schmuch and Lowell Grube.

At the Christmas break, Bob Howe and Sam Yoder were tied for the open class lead, while Ed Spotts comfortably led the industrial flathead competitors. These drivers would be named LANCO indoor champions when the series was not resumed as planned on January 8th. There is no current information as to why the series was discontinued. Early crowds were excellent and held at acceptable numbers throughout the series. The reason appears lost to history. 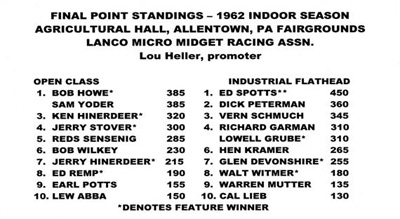 For the 2012 Allentown Fair, an EARHS display inside Ag Hall commemorated fifty years since the sounds of indoor micro-midget racing provided winter entertainment for fans in the Lehigh Valley.