Sixty years ago, as the calendar flipped to 1953, Reading racer Ernie 'Lover Boy' McCoy, nee Ernest Musser, had big plans for the new season. Several seasons honing his skills racing midgets with the American Racing Drivers Club and a terrific 1952 season with the AAA sprinters, finishing second in AAA eastern points, left him on the doorstep of every racer's dream, a ride for the Indianapolis '500'. 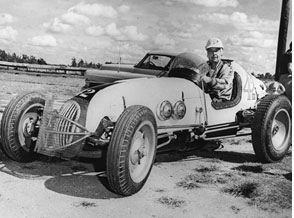 Early in the 1953 season, Ernie was back in the Vargo Offy and was enjoying another fine campaign in the sprinters. Ernie was hot in the midgets and sprints in the spring of 1953 and his chorus of fans was calling for a shot at the Speedway as the month of May neared. At Reading , AAA 1953 below 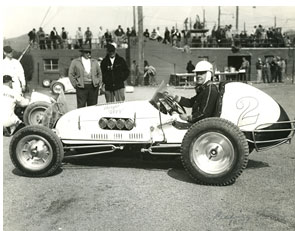 At Indy in 1953, Ernie's dream came true. At the wheel of A. E. Chapman's #12 Offy, he qualified at 135.926 mph to start 20 th in the Memorial Day Classic. Ernie completed all 200 laps, finishing eighth at an average speed in excess of 100 mph to qualify for membership in the prestigious Champion Spark Plug 100 mph Club. Bill Vukovich won his first '500'. 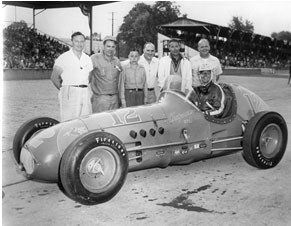 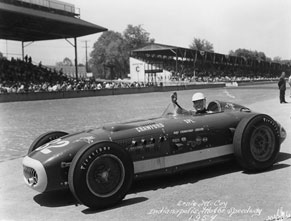 After Indy, Ernie continued to follow the champ cars, hoping to catch on with a ride for the full championship schedule. At Darlington , SC on July 5, 1954, Ernie was tapped to drive relief for Jimmy Dawalt in the Auto Shippers #16 after failing to qualify the Martin Bros. Offy #71 earlier in the day. On lap 78 Ernie stuffed the Auto Shippers under the turn two guard rail, receiving severe lacerations to his face.

After several weeks of recovery, Ernie was back to the AAA sprint car circuit, finishing third in the final eastern sprint car standings. Ernie's popularity continued with the eastern fans, who had precious few local drivers to cheer at Indianapolis . They were quick to support an eastern driver who for years thrilled them at many different midget and sprint car venues. 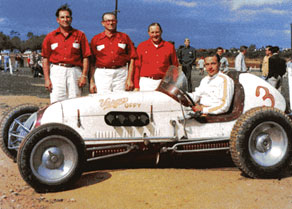 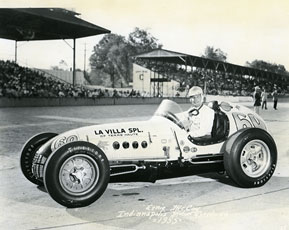 Ernie McCoy attempted to qualify the LaVilla Offy in 1955.

In May of 1955 Ernie McCoy was back at Indianapolis with a ride in the LaVilla Offy, an upright dirt car. By 1955 there were still a few dirt cars able to qualify at Indy, but roadsters, like the Ray Crawford entry he had driven the previous year, dominated the field. Despite a month-long effort, Ernie's qualifying average speed of 133.038 mph was not good enough to crack the starting lineup. Ernie and the LaVilla #69 were second alternates, one spot behind fellow eastern midget and sprint car legend, Len Duncan, in the Ray Brady Offy #24. When the green flag flew, both McCoy and Duncan were among the spectators, although both would have been welcome additions to the field in the eyes of eastern fans.

Ernie McCoy's disappointment in failing to qualify for the 1955 Indy '500' pales in comparison to the fate of two-time winner, Bill Vukovich, who was seeking his third straight Indy win. While leading on lap 57, he became involved in a chain-reaction crash off turn two, vaulted over the fence and was fatally injured, ending his domination of the Memorial Day event.

Ernie McCoy's ride in the LaVilla Offy at Indy in 1955 would be his last at The Speedway. However, Ernie continued on the national sprint car circuit through the 1957 season. While he made the transition from AAA to USAC in 1956 with the sprinters and midgets, his opportunities at Indianapolis were over.

Ernie returned full time to his first love, the ARDC midgets. Although he would occasionally take a sprint car ride with the eastern-based United Racing Club, Ernie again became one of the stars of the ARDC circuit. 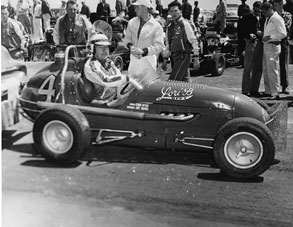 Ernie's favorite ride on the ARDC midget circuit was the Lori-B Offy. Perhaps Lori-B had something to do with it? 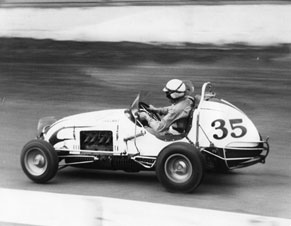 Ernie was a winner of the 50-lap ARDC race at Allentown on 9-15-62, re-uniting with long time owner and pal, Jake Vargo. Although it was 'Dutch' Schaefer Day, Ernie grabbed the feature money! 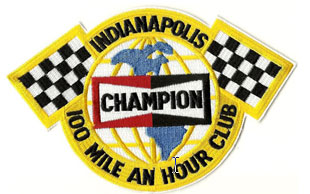 When you watch the Indy '500' this May, think of Ernie McCoy and his ride to membership in the Champion Spark Plug 100 mph Club 60 years ago.