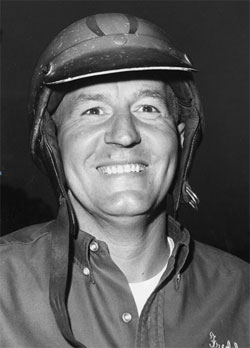 January and February in Pennsylvania aren't usually discussed in travel brochures intended to entice visitors to the Keystone State . Most Pennsylvanians simply endure these months with an eye toward the other three seasons,, which all have their attractive qualities.

As I make plans for a successful 2014, I'll have one eye in the rear view mirror. On January 31, 1931 Freddy Adam entered this world and on February 1, 2013 he left it. In the eighty-two years and a day in between, he became the 'Kutztown Komet, one of the most respected modified stock car racers in the eastern Pennsylvania region, and Kutztown , PA 's favorite son.

I began watching Freddy as a youngster at Dorney Park , where he became the final modified stock car champion at the flat 1/5 mile Allentown , PA asphalt bullring. Freddy went on to become a three-time track champion on the dirt at Hatfield, PA and competed successfully in every Reading Stock Car Assn. season, winning 20 feature events at Reading and 34 on the RSCA circuit. While Freddy's local accomplishments were impressive, he made national history fifty years ago when he won the Race of Champions modified stock car classic at Langhorne on October 11, 1964, the final event to cap thirty-nine years of dirt track racing on the famed Bucks County mile.

I wasn't able to keep a close watch on Freddy's exploits in the late 1960s and 1970s as my racing took me to open cockpit cars, while Freddy continued to build his impressive career with the modifieds. Sure, we'd talk at many of the season-ending banquets, but I can't say I kept up with the details of his career.

By 2007 we had both long ended our competitive racing, but we continued to show up at racetracks. At the Williams Grove Old Timers event at Latimore Valley Freddy was taking some laps in Pete Trumbauer's #32 Ford coupe when the conversation turned toward Freddy's desire to share his life's story. While Freddy was renown as a wonderful 'teller of racing tales' and he and his wife, Mary, had collected substantial information about his career, the task of putting everything in order and actually writing the story was daunting. Ever the optimist, Pete told Freddy, 'Paul Weisel can do that!' As I was loading the #54 Fred Brink TQ after a day of playing in the dirt, Pete strolled by to advise he had just made the deal for me to write Freddy Adam's biography. 'You did WHAT?', was my response as Pete calmly assured me Freddy needed help with a great project and I was the guy to do it.

Most people who think their life story needs telling are woefully unprepared to address the details required for the project. At our first meeting I was stunned, pleasantly stunned, to review the mountain of information Freddy and Mary had assembled. There were two hundred or so photos, banquet books, programs, and a pile of spiral notebooks from Freddy's sister, 'Tootie', noting the lineups and results for years of modified stock car events at Reading and other speedways! Most importantly, there was Freddy, sharp as a tack with a lifetime of great stories. This was no fantasy, this project had a chance!

Initially, we pulled together an outline and I began interviewing Freddy's fellow competitors, car owners, family, and friends. Everyone was eager to help and enthusiastic about the project. As I wrote, I brought the text to Freddy and Mary for their input and keyed my next interviews with Freddy to confirm the specific facts and events covered by the next chapter to be written. During one of our meetings in the Adam family kitchen, Freddy was perplexed by one of my many questions when he dead-panned, 'You know, Weisel, you ask the damnedest questions!' Getting someone else up to speed about the details of YOUR life to the point they can write it down in a sensible narrative takes a fair amount of time and a tremendous amount of cooperation. While Freddy's many stories were recounted in great detail, putting them into his life's timeline proved more difficult than Freddy had originally thought.

Since this project was done in my 'spare' time, I spent two years dragging around a thick manuscript, reading, re-reading, correcting and refining the text. Then came the task of scanning all of Freddy's photos, adding many from EARHS files, and putting them, with appropriate captions, into the correct position in the text. I believe you can't tell one man's story in a vacuum. You must show how he interacted with the rest of the world, so Freddy's story is also the story of other race tracks, sanctioning bodies and, most importantly, the people who affected Freddy and helped in his successes. At the end of the day, we settled on the title, 'The Life and Times of the Kutztown Komet – The Freddy Adam Story' to reflect the scope of the book.

Celanie Polanick assisted with the technology for the cover designs, although by the time covers were required I knew exactly what I wanted and wasn't open to many 'artistic' suggestions. Mario Andretti, racing writer Ciddi Cinelli, and second generation driver, Rich Tobias kindly offered their thoughts on Freddy for the back cover and I turned to Eric and Henry Haas at Parkland Bindery in Allentown, PA to print the final product.

When the book became a reality, the great times with Freddy had just begun. It provided Freddy an opportunity to reconnect with many of his fans and former competitors. Freddy was usually the last to leave the pit area, staying late to greet all his fans and re-run the event with his racing buddies, so he was a natural on the book tour. Although never one for 'bookwork', Freddy dutifully signed every copy of his book. Mary and I had a good laugh last year when I related we could have simply had Freddy's signature printed under his photo on the title page. I'll continue to sign under my photo – I think of Freddy with every stroke of the pen.

As with all labors of love, Freddy's book is a non-profit item. Although the book is marketed through KLASCAR, Inc., all proceeds from the sale of the book after printing expenses, are donated to the Eastern Auto Racing Historical Society, a 501(c)3 federal and Pennsylvania state non-profit dedicated to the preservation of eastern auto racing history. Copies are available from KLASCAR, Inc., P.O. Box 75 , Orefield , PA 18069 for $29.95, plus $1.80 PA sales tax, and $5.95 USPS mail service. You can also phone Paul Weisel at 610-395-5303. If you knew Freddy, you'll want a copy to relive some great times. If you don't know Freddy, you'll need a copy to learn how a Pennsylvania Dutchman thinks, about a time when race cars were built, not bought, and to relive the golden age of modified stock car racing. 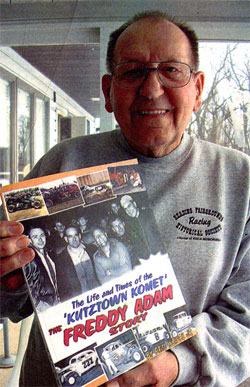