When the calendar flipped to begin 1955, the American Automobile Association began its 54th season as the major sanctioning body for auto racing in the United States. AAA ran racing with an iron hand and drivers with aspirations of competing at the Indianapolis '500' were forced to work their way up the AAA sanctioned ladder of midget and sprint car events before receiving authorization from AAA officials to compete in the most prestigious race in the country. After Danny Kladis copped the opening 100-lapper in the Allen County War Memorial Coliseum in Fort Wayne, IN and Chuck Rodee became the 1955 AAA Indoor Midget Champion, the 1955 season was off and running.

As the outdoor season began the '55 campaign turned dark when Larrett 'Larry' Crockett was fatally injured in a AAA sprint car event on the dirt mile at Langhorne on March 20.During the Crockett Memorial at Langhorne on May 1, 1955, veteran Mike Nazaruk had his Ted Nyquist Offy sprinter at the front of the feature field, but made contact with the outside rail and suffered fatal injuries during the vicious series of flips which ensued. 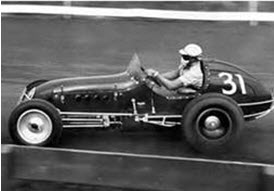 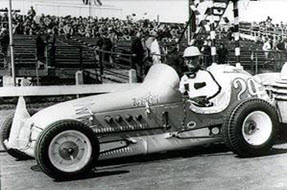 When the open wheel elite convened at Indianapolis, veteran driver, Manuel 'Manny' Ayulo, was fatally injured during a practice crash on May 16th.With many competitors believing bad things come in threes, there was hope to finally get some positive press for auto racing’s jewel on the schedule, the Indy ‘500’.These hopes were dashed when two-time and defending Indianapolis champion, Bill Vukovich, was killed pursuing his third straight Indy win.Despite the tragedy, Bob Sweikert drove the John Zink Offy to victory in the ‘500’ and parlayed his Indy success into the 1955 AAA National Championship.Sweikert added a third crown in 1955, also notching the AAA Midwest Sprint Car championship, the only man to ever claim three AAA titles in the same year. 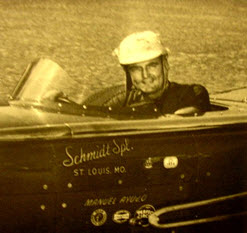 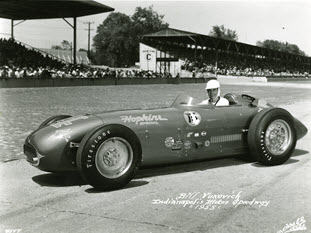 Manuel Ayulo and Bill Vukovich were both killed at Indy in 1955.Ayulo in practice – he was not wearing his seat belt and his pockets were full of wrenches and Vukovich while leading the '500' in search of his third consecutive Indy win. 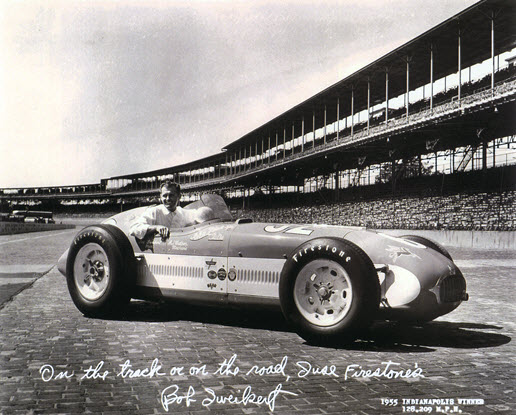 While the Vukovich fatal at Indy was big news in the United States, two events in Europe shocked the racing world.On May 26th, Alberto Ascari, the 1952 and 1953 World Champion as a Suderia Ferrari driver, crashed to his death in practice for the Monza, Italy Grand Prix.Ascari had qualified a Ferrari for Indy in 1952 and was well-liked in the states. 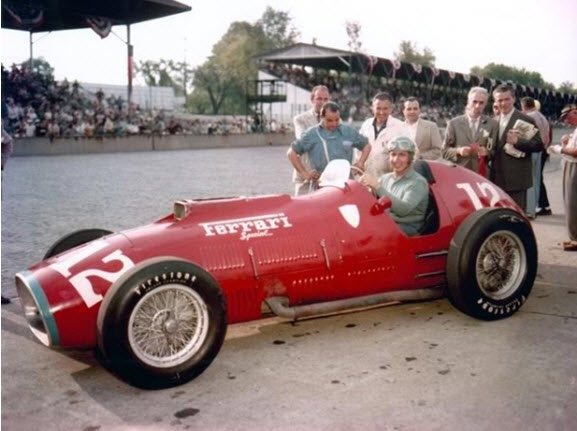 Following the loss of Ascari, the 23rd running of the French Grand Prix d'Endurance, known better in the states as the 24 Hours of LeMans, June 11-12, 1955, made world headlines, just 35 laps into the event.After race leader, Mike Hawthorn, received a late signal to pit, he made an adroit right to enter pit lane, assisted by the new disc brakes on his Jaguar D-type.Lance Macklin, driving a slower Austin-Healey 100 which Hawthorn had just passed, swerved to the left to avoid a collision because he couldn't match the braking power of the Jaguar.The maneuver put the Healey in the path of Pierre Levegh's #20 Mercedes-Benz 300 SLR, which made contact with Macklin’s left rear and catapulted into the main grandstand at 150 mph.Front end suspension parts, sheet metal, and even the engine separated from the chassis and knifed through the crowd.The fuel cell burst into flames and ignited the remains of the car’s magnesium alloy body causing a fire in the grandstand, which spread when firefighters attempted to use water to put out the flames.In the end, Levegh and 83 spectators were pronounced dead at the scene with upward of 120 spectators injured.The world’s newspapers had a field day. 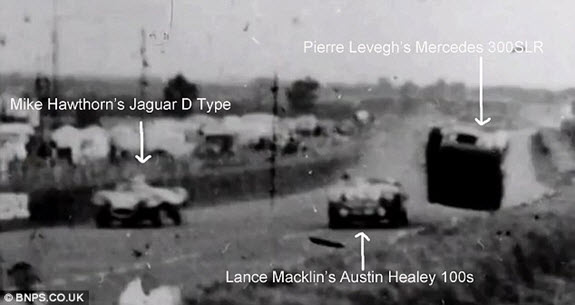 Despite his successes in 1955, Bob Sweikert did not escape personal tragedy in 1955.He owned his own two-car AAA sprint car operation and his sprint car teammate, Jerry Hoyt, was fatally injured on the Oklahoma City half mile dirt on July 10th as he chased his boss in the opening heat race.Hoyt was the Indy pole winner in 1955 and had married only two weeks before his fatal crash. 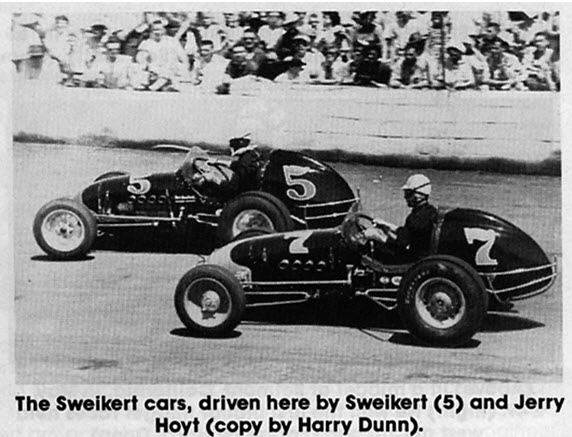 After six months of horrific press for the sport of auto racing, U.S. Senator Richard Neuberger, Democrat, Oregon, rose before his colleagues on the floor of the senate on July 12, 1955 and said, 'Mr. President, I think the time has come to forbid automobile racing and similar carnages in the United States.I doubt if there is as much bloodshed in Spanish bullrings as today is occurring on automobile race tracks in this country.Now, even women racing drivers are getting killed in fiery and dreadful wrecks......I believe the time has come for the United States to be a civilized nation and stop carnage on racetracks.The deaths on our highways are sad and tragic, but at least they are not purposely staged for profit and for the delight of thousands of screeching spectators.'  As the national sanctioning body for professional racing the country, AAA was thrust into the middle of the controversy.

On August 3, 1955 Andrew J. Sordoni, president of AAA, released this statement:  'Upon completion of the schedule of events already undertaken for the year 1955, the AAA will 'disassociate' itself completely from all types of automobile racing in the United States.'After the initial shock of the AAA decision, many in racing circles saw this development as an opportunity, rather than a dilemma.

Indianapolis Motor Speedway owner, Anton 'Tony' Hulman called a meeting on August 10th at the Board of Health Auditorium in Indy for all racing personnel affected by the AAA withdrawal.216 men from all corners of the country attended, realizing they were now responsible for their own destiny.

Judge George Ober, of the Speedway, IN Magistrate's Court, presided over the meeting and presented a plan to form a new organization, with representation from drivers, owners, mechanics, and promoters, plus a representative from the Indianapolis Speedway, another party, vitally interested, but not directly involved in racing, and a member of the present AAA Contest Board to provide continuity.

After a short recess for deliberation, the groups returned to the meeting with their representative choices.Drivers chose 20-year veteran Duane Carter (Sr.), owners tapped Bob Estes, owner of a Lincoln-Mercury dealership in Inglewood, CA and veteran sprint and championship owner, promoters nominated Tom Marchese, head of the Milwaukee, WI mile operation, and Herb Porter was voted to represent the mechanics.Not surprisingly, Tony Hulman was the Speedway representative, Col. Arthur Herrington, president of the current AAA Contest Board, was chosen, and Judge Ober became the 'interested party' on the new board.

All the men selected realized the responsibility they had accepted.Judge Ober was named the chairman of the committee and outlined their objectives as 1) raise the capital necessary to launch a nationwide sanctioning body, 2) develop competition by-laws for the conduct of midget, sprint, late model stock, championship, and sports car events which will be ratified by their membership of drivers, owners, mechanics, and promoters, 3) develop rules for all levels of competition, investigate an affiliation with the Federation Internationale de l’Automobile (FIA) in Europe, and examine criteria to improve track safety for sanctioned tracks, 4) develop an organization to enhance the future of American auto racing through a nationwide public relations program.

While the details of the new sanctioning body were being developed, America’s professional racers completed the 1955 AAA schedule.Only the death of popular Jack McGrath during the running of the Bobby Ball Memorial championship car race at the Arizona State Fairgrounds in Phoenix on November 6th marred the rest of the season.When the dust settled, Tommy Hinnershitz had won his fifth career AAA Eastern Sprint Car championship, 'Cactus' Jack Turner from Spokane, WA repeated as AAA National Midget Champion, and Frank Mundy won the 1955 AAA Late Model Stock Car championship.

Over the final four months of 1955 Judge Ober and his committee tackled each of their committee’s assignments and their efforts were ratified by the men they represented.Bob Estes is credited with proposing the name of the new sanctioning body - the United States Auto Club, i.e. USAC, and when Gene Harley drove Ray Bolander’s #8 Offy midget under the checkers at the Coliseum in Fort Wayne, IN on January 8, 1956, the event was USAC sanctioned.The new sanctioning body presented a full season of racing in 1956 and is still sanctioning races sixty seasons later. 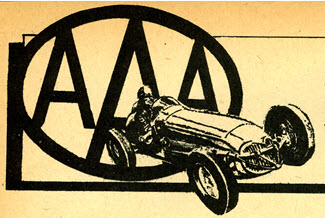 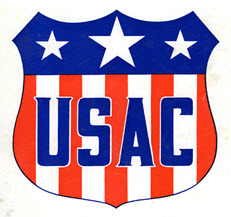