Indoor ľ midget racing was quite the rage during the winter months in the 1950's and 1960's. Races were run at many facilities in the east starting with the Uline Arena, Washington, DC on November 20-21, 1950, Tony Bonadies of the Bronx, NY won the opener and Wayne Selser of Kansas City, KS took the second event sanctioned by the Tom Thumb Midget Assn.

In 1962 Allentown race promoter and official, Lou Heller presented a five race micro-midget series in Ag Hall on the Allentown Fairgrounds. His success didn't go unnoticed by Allentown radio personality, body shop owner, and racing supporter, Luther Gehringer, known to his radio fans as 'Dopey Duncan'. Dopey was soon inside Ag Hall, taking measurements and making sketches for a slightly larger track to hold TQ events. He found a willing partner in Dr. Rex Green, himself a TQ owner, having recently purchased the former Bob Pouleson #706. Doc had up-and-comer, Bob Wilkey driving his #31 and was on board for a three-race series scheduled for March, 5, 12, & 19, 1966.

Prior to the races a hoard of volunteers showed up at Ag Hall to turn Dopey's sketches into a race track. A freshman at nearby Muhlenberg College, I reported as well and was paired to work with Tom Wilkey, Bob's brother. This chance introduction produced a lifetime friend and mentor. Tom was a low-buck mechanical genius and I learned a great deal stooging for him for three years before turning 21. Tom also introduced me to Willie McCumsey, my first open cockpit owner.

On March 12 Len Duncan in Bob Kettell's #57 took the checkers ahead of Albert, Craig, Bobby Courtwright, and Jerry Wall. Ohio driver Steve Unger, Stover, and Bob Wilkey won heats with Duncan and Wall taking the checkers in the semis. Jimmy Maguire won the 'B' and Larry Rice was the consolation winner.

On the final night of racing, ATQMRA driver, Larry Michaels, ended the ARDC streak, winning the main event in his own #39 roadster over Freddy Stutz, Ohio traveler, Bobby Hamilton, Dick Mahany, and Bobby Albert, who clinched the series title with his 5th place finish. Rice, Michaels, and Stutz won heats as Michaels and Stutz repeated in the semis. Doug Craig won the 'B' and Duncan took the consy.

The series drew good crowds, was an artistic if not financial success, and was the last indoor racing event in Allentown until Lenny Sammons brought the TQs back to run the PPL Center fifty years later in January of 2016. Doc and Dopey often joked these were the most expensive seats they ever bought to watch TQ racing, but both were very proud of their efforts. 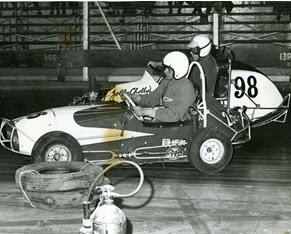 26 Jerry Stover and 98 Dick Peterman battle inside Ag Hall at the Allentown Fairgrounds in March, 1966. 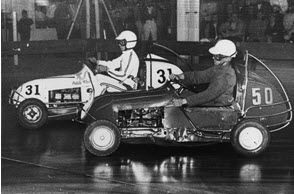 The Wilkey brothers, Bob in Doc Green's #31, and Tom in his own Crosley powered #50 at Ag Hall.


Lew Abba, Len Duncan, Dick Peterman, Jerry Stover, Bob Wilkey, and Tom Wilkey were the only drivers to compete at Ag Hall in the micros in 1962 AND the TQs in 1966.