William 'Red' Riegel was a Pennsylvania open wheel favorite during the 1960s. Red started in the micro-midgets at Leesport, PA, and graduated to ARDC midgets where he scored 17 feature wins, including 15 at Hatfield. His success at the popular PA dirt dish had even the seasoned ARDC veterans trying to emulate the Riegel groove around Hatfield.

When long-time owner John Wergland chose Red to pilot his 1965 USAC sprint car entry, Riegel made the most of the opportunity, scoring four wins in seventeen races at New Bremen, OH on 5-2, Reading on 6-19, Eldora, OH on 6-3, and the Allentown, PA Fairgrounds on Wednesday, August 11, for a ninth place finish in the '65 USAC sprint car standings. 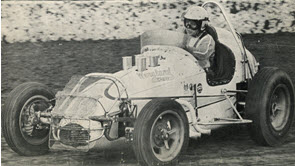 Unfortunately, Red and his buddy, veteran Jud Larson, would perish together in a grinding first turn USAC sprint car crash at Reading on Sat., June 11, 1966, now 50 years ago.

While many are familiar with Red's midget and sprint car achievements, his ultimate goal often goes unnoticed. Jud Larson was going to stay with the Riegel family after Reading and both he and Red were planning to be at Langhorne for the champ car race on Sunday afternoon, June 12th. Jud was always open to making a buck, but Red was still very much pursuing his dream of racing at Indianapolis.

On 6-18-1961 PA owner, Jake Vargo, impressed with Red's Hatfield exploits, selected Riegel to steer his #35 champ car on the tricky Langhorne dirt mile. Although Red could not crack the field, his all-important first champ car ride was on his resume. Red got another chance after PA legend, Tommy Hinnershitz, who was the chief mechanic on Lee Glessner's Windmill Truck Stop Offy #96, tapped him to drive at the mile dirt at the California State Fairgrounds at Sacramento. On 10-29-1961, Red made his first champ car start, qualifying 9th quick for the 100-miler and finishing 13th after blowing a right rear tire and spinning into the fence on lap 70. Unfortunately, Glessner retired as a car owner and Red was back to square one on his road to Indy. Well, maybe not back to square one, but it took him until 1965 to find another champ car seat. 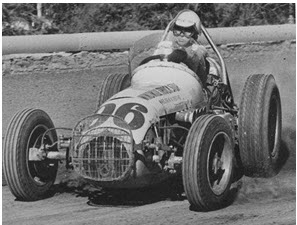 As a result of his success on the USAC sprint car trail early in 1965, Walter Beletsky called to offer Red the drive in his Lesovsky dirt car #49 Offy at Langhorne on 8-8-65. Red made the most of the opportunity, qualifying 15th and finishing 11th in the 100 mile grind.

Since Beletsky had no plans to campaign the car in the midwest, Red was again out of a ride. However, after his 4th sprint car win of the year at Allentown on 8-11, the phone rang again with Andy Dunlop, chief mechanic on Pete Salemi's Central Excavating Offy #81, on the other end. Dunlop was looking for a shoe for the remaining dirt races on the schedule and Red was quick to accept. In his first outing on the mile at Springfield, IL on 8-21-65, Riegel qualified 7th and finished 14th, retiring with mechanical gremlins in the late stages.

Indy vet Ronnie Duman took over the ride for the Milwaukee '200', but Red was back in the Central Excavating car for the mile at DuQuoin, IL on 9-6-65. Red qualified 14th, finished 6th and Andy Dunlop was starting to like how things were going.

Despite Red's successes on dirt, Ronnie Duman was again behind the wheel of the Central Excavating Offy for the pavement race at Trenton, NJ one week later. Duman qualified 14th to put the car in the show, but wrecked in turn one on lap 52, severely damaging the car and effectively ending the 1965 season for Salemi and Dunlop. As a result, Red had no ride for the dirt miles at Sacramento and Phoenix.

For 1966 Red was determined to get some pavement experience prior to Indianapolis. Riegel talked his way into Joe Barzda's California Speed & Sport Offy #87 for the race at Trenton's paved mile on 4-24-66, qualified the veteran machine 22nd and brought it home 12th. Not bad for his first pavement ride, but not good enough to impress anyone at Indy. Red had a few irons in the fire for champ car rides and then came the sprint car race at Reading on June 11, 1966.