So what event from eighty years ago still affects some of us today? 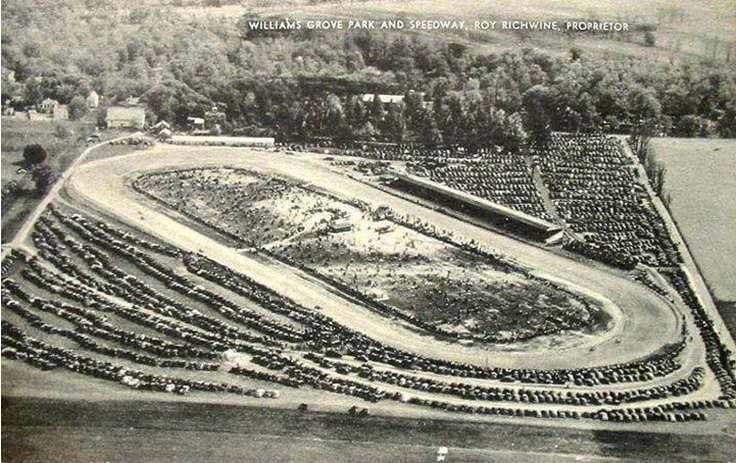 In the fall of 1937 local big car owner, Emmett Shelley, convinced Roy Richwine, owner of Williams Grove Park in Mechanicsburg, PA, the vacant field across the road from his amusement park was the perfect spot to construct a half mile dirt track dedicated to auto racing. Richwine was convinced the racing venue could not only attract more visitors to Williams Grove Park, but also stand on its own as a top tourist attraction in the Harrisburg, PA area.

By the spring of 1939, the half mile dirt was ready and Tommy Hinnershitz made his first of many entries into the Williams Grove record books by taking the May 21st AAA big car feature event before a standing room only crowd. After a three-year government hiatus to preserve essential war supplies (6-'42 through 8-'45), the AAA national stars and the passionate crowds returned to the 'Grove'. In 1947 lights for night racing, a pedestrian tunnel under turn one, and the iconic pedestrian bridge across the backstretch were added.

In the 1950s AAA sprint car, midget, and occasional championship car programs dominated the Williams Grove schedule and when the United States Auto Club took over for AAA in 1956, the best open wheel drivers in the country continued to appear before the PA fans.

On the local level, jalopy stocks had top billing on Friday nights in the early 1950s. The stock cars transitioned into cut-down square coupes, then on to 30"x90" supermods, or 'bugs', with unlimited engines, and finally on to... 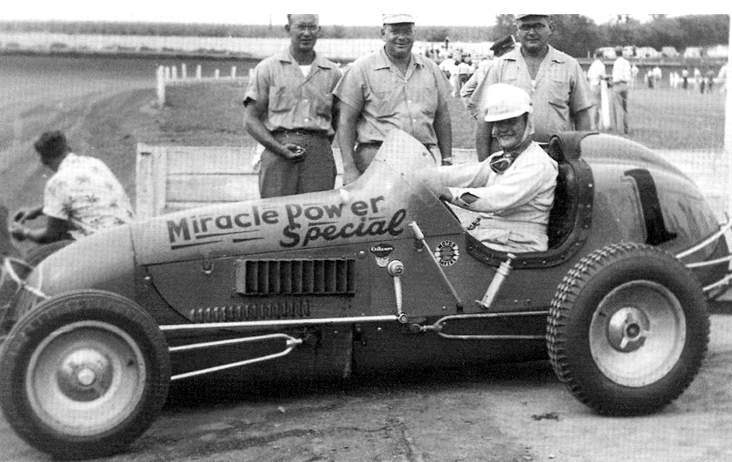 By the 1960s Friday night sprint car fields swelled to over sixty top teams battling for 24 feature event starting spots. In 1963 'The Grove' invited the nation's best sprint car and supermodified teams for the 100-lap Williams Grove National Open. Michigan racer, Gordon Johncock, was the first winner of the classic and went on to score two Indianapolis '500' victories.

When the World of Outlaws visited 'The Grove' with plans to snatch all the money, the locals formed the 'PA Posse' to defend local honor and retain as much of the purse money for PA-based sprint car teams. When the USAC sprint cars came to town, few locals were ready to take off the wings and join them. The notable exception was Mitch Smith, who joined the fray on a temporary permit and left the USAC national stars in a state of shock, winning several events with bone-chilling performances to post popular wingless wins.

While many speedways have difficulties transitioning to a new generation of headliners, the '90s, and 2000s gave the Williams Grove faithful new stars to cheer. Keith Kauffman, Fred Rahmer, Lance Dewease, Don Kreitz, Jr., Billy Pauch, Chris Eash and others became the standard bearers for the Beer Hill Gang and traveled to many of the top sprint car venues in the country to serve as PA ambassadors to the sport.

Williams Grove Speedway continues to maintain its 'must see' status for sprint car fans from all over the world, not just the USA. In addition to its weekly sprint car programs, 'The Grove' has continued to present midgets, late models, super sportsmen, as well as World of Outlaws and All-Stars sprint car programs and USAC champ dirt car events. If you haven't been, make it happen at your earliest opportunity.