In 1860 Solomon Dorney developed a fish hatchery on his land southwest of Allentown and began to hold weekend fishing contests. He later added picnic groves, a swimming pool, and a few playground rides for families, who spent the day while fathers and husbands fished. Pony rides and a few mechanical rides appeared by 1884 when the property was renamed Dorney's Trout Ponds and Summer Resorts as the community of Dorneyville developed to serve the burgeoning amusement park.

In the late 1890s the Allentown-Kutztown Traction Company completed a double track trolley line between Allentown and Kutztown and the most popular stop on the line was Dorney Park. In 1901 AKTC purchased the park from Solomon Dorney and Jacob Plarr, a visionary concessionaire from Philadelphia, installed an iconic Dentzel Carousel, a signature ride at Dorney Park. A few years later, Jacob's son, Robert Plarr, became an employee and started a lifetime association with Dorney Park. In 1923 Bob Plarr, Bill Ruske, and Ray Sandt purchased the park from AKTC and built the park's famous wooden roller coaster. In 1930 track was added to the enlarge the coaster to its current length and later in the decade, Dorney's 'Zephyr' art-deco train began to tour the park. Softball games were often held between local teams on a baseball diamond on a field above the main park.

By the mid-1930s the midget craze had come to the east coast and promoter, Sherman 'Red' Crise, was in charge of tracks at Freeport, Long Island and Hershey, PA. In the winter of 1938 he contacted Bob Plarr about racing at Dorney Park and it was decided to turn the low-income ball diamond into a standard 1/5 mile cinder track. The baseball bleachers provided seating around turns 3 and 4 (the reason these stands never really followed the contour of the track) and a new set of stands was constructed on the main straight. 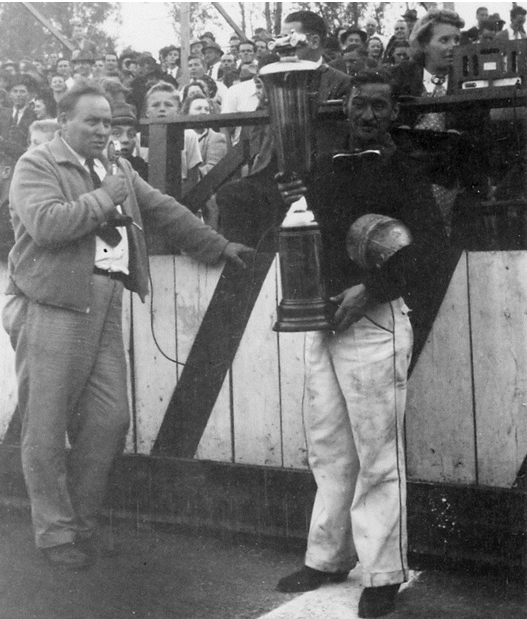 For 1940, Crise signed with AAA to sanction midget events at Dorney until racing was banned for the duration of WWII. In September 1945 the midgets returned to the Park, but the sanction quickly shifted from AAA to the American Racing Drivers Club.

The ARDC sanction through 1949 produced some stirring weekly competition, but also claimed two drivers, Harry 'Hap' Pierson on 6-27-47 and 'Three-Wheeler' Harry Sheeler on 6-11-48. In 1949, Red Crise booked three stock car events in September with midget driver, Ralph Sheeler, Jimmy Stathman, and Tommy Coates taking the wins. In 1950, the stocks ran weekly Wednesday night programs, while the midgets remained the Saturday night headliners. In 1951, Crise moved the modified stock cars to monthly Saturday night appearances and by the following year, the modifieds were the Saturday night attraction and the midgets were banished to a traveling schedule.

Through the rest of the 1950s, modified stock cars were the attraction at Dorney Park with Kutztown's Freddy Adam taking the final modified track championship in 1959 in a season shortened by purse disagreements with promoter, 'Red' Crise. For the remainer of the 1959 season, go-karts were introduced on Sunday afternoons with limited success.

By 1960 Crise was gone, replaced by Jerry Fried, the veteran 'race organizer' on Sunday nights at the Nazareth, PA half mile. Fried experimented with several classes of stock cars to top the program, eventually choosing his limited sportsman division, second on the card to the modifieds at Nazareth. Fried also added a low-cost second division to provide a place for intrepid local young men to learn the ropes in stock car racing. As years went on headliners such as Don Hersh, Bill Lavenburg, Tom Rooney, Bimpy Marx, Norm Behler, Freddy Hamm, Charlie Gilmore, Tony Hirschman, Paul Bauscher, and George Wambold, became household names in the top Sportsman class and the support class went from hobby cars to late models with its own set of heroes.

Jerry Fried remained at the helm of the Dorney Park racing program for 27 seasons (1960-1986) before he had the rug pulled from under him when South Whitehall Twp. filed a suit against Dorney Park for unpaid amusement taxes. Dorney brought a suit of its own against the township for $610,000 in amusement taxes it claimed to have overpaid since 1980. In the settlement the Park agreed to demolish the track and end all racing at the Park. In return, the Park received a permit for a new roller coaster on the site of the track and the tax ledger was wiped clean. Fried, who had a year left on his contract, sued, but the park immediately tore down the track and began construction of the Hercules coaster. They then slow-walked Fried's suit until Fried died in 1989, making the case moot.