Don Edmunds, iconic racer, designer, and builder of an array of race cars, a restorer of vintage race cars, builder of world-class race car models, and member of both the National Midget (1994) and Sprint Car (1991) Hall of Fames, died in Gold Beach, OR after a brief illness on August 12, 2020.  Although a few weeks short of his 90th birthday, Edmunds packed more living into his 89 years than most of us can even envision.

In his early years, Edmunds participated in land speed record runs at both Bonneville, UT and El Mirage, CA before joining the jalopy stock car craze in southern California.  By 1952 Don had progressed to the United Racing Assn. midget division and won his first open-wheel main event for owner Doug Caruthers at South Mountain Speedway in Phoenix, AZ in 1953.

In 1955 Edmunds drove his own midget to #3 in URA points but parked his racer in '56 to concentrate on his job building Indy roadsters with Eddie Kuzma and to travel to Indy as the right front tire changer with the Lysle Greenman – Ernie Casale team.

For 1957, Don was back at Indy as the driver of Doug Caruthers' Braund Plywood Offy #67.  Although the Caruthers' team could not achieve enough speed to qualify, Don was a last-minute replacement for '53 AAA midget champ, Leroy Warriner, in the McKay 500G Kurtis roadster.  Edmunds turned in a 140.440 mph average speed to earn the 27th starting spot.  Although running in or near the top ten, Don spun in his own oil, in turn, three of lap 170 when the oil tank on the McKay car ruptured.  Don still finished 19th and was named 1957 Rookie of the Year.

Cortner was also killed in an Indy practice crash.  Don returned to California to work for Bill Devin producing fiberglass-bodied sports cars and married Garnet Hawkins on August 28, 1959.  Don and Garnet were 16 days short of their 61st wedding anniversary.

Stints with Bill Stroppe and Bill Thomas produced, among many other cars, the Stroppe 'bear cage' and the 'Cheetah' sports cars.  Edmunds built the Cheetah from several pencil sketches and his fertile mind. Its success catapulted him onto the national stage.

An order from Gordon Van Liew for a rear-engined Indy car for the 1964 '500' was the impetus for Don to leave Bill Thomas and open Don Edmunds' Autoresearch.  In seventeen years of business, the company produced nearly 700 race cars, including ¾ midgets, midgets, sprint cars, super modifieds, champ dirt cars, Formula Vs, and Indy cars.  In addition to the Vita Fresh Indy car in 1964, Don built the '70 'Wolverine” for J.C. Agajanian and Leonard Faas, and the 1977 'Lightnings' for Lindsey Hopkins, et. al.

However, of all the cars produced at Autoresearch or before, Don's favorite race car is his 1973 Offy powered, 4-wheel independent suspension midget roadster.  At its debut at the Phoenix mile on 11-25-73 most competitors scoffed at the out-dated Offy engine, but when Lee Kunzman put it on the pole with a new track record, the smiling stopped.  USAC officials wanted the nose trimmed back by approximately 2” on both sides, but Don wasn't about to take tin snips to a nose, whose dimensions were within the printed USAC rule book.  As a result, the car did not run at Phoenix.  When owner Howard Linne sold the car to customers in Australia, Don thought his pride-and-joy was gone forever.  In 2010, Don finally completed negotiations with the Tatnell family and today his roadster sits proudly on display in his Oregon shop.

In 2016 Don threw himself headlong into a collaboration on his biography with a writer, Paul Weisel.  'The Saga of Rotten Red – The Don Edmunds Story' reflects Don's first-hand account of nearly 90 years of a life well-lived.  Copies are available at 610-395-5303 and all profits from the book are donated to the non-profit Eastern Auto Racing Historical Society. 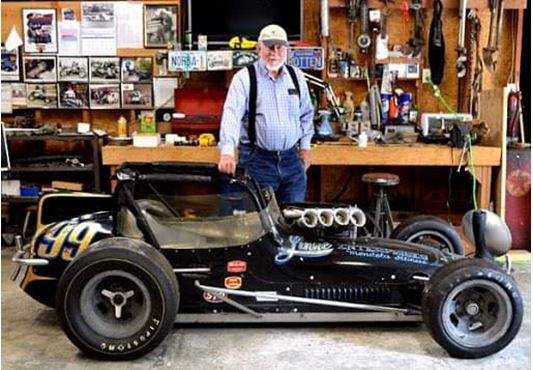 2016, Don and the apple of his eye, his Offy powered 4-wheel independent roadster midget #99