Upside Down and Backwards

As the midget racing craze was gaining popularity in the U.S. in the 1930s, one of the most intriguing aspects of the sport was the vast number of engine choices available.  Motorcycle engines like Harleys and Triumphs, the outboard boat Elto 4-60, and others were popular, including tractor and small car engines, which were sleeved or destroked to meet car specifications.  By the mid-1930s the 4-cyl. double overhead cam Offy was introduced to owners with deep pockets and many of the less affluent owners pressed the 1937 Ford V8-60 flathead engines into service.

By 1939 Buddy Shay and his brother, Vic Schey, (Buddy changed his last name to help the announcer) were looking for a cheap junkyard answer to an age-old problem.  Buddy had been running an old sleeved-down Chrysler 4-cylinder in his narrow Cullen-Thompson rail chassis.  It fit well, but it was down on power and it had to go.  The cheapest and easiest solution was to find a wrecked Ford and appropriate the V8-60 engine for racetrack duty, but the V-profile simply wouldn't fit into his narrow chassis without the intake and carbs protruding way above the hood.  Handling would clearly be adversely affected.  The solution was to turn the flathead upside down and install it from the bottom.  Presto, the V8-60 fit 'beautifully', and the center of gravity of the car was substantially lowered.  However, there were a few engineering issues to address! 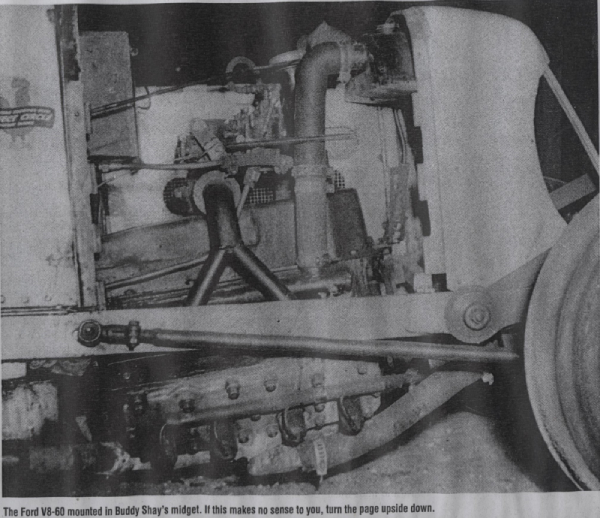 With the engine in its 'new' position, Denver mechanic, Dale Mortimer, decided to operate the engine 'backwards' to utilize rotation to the left side of the car for increased traction.  So, exhaust ports became intake ports and vice versa.  Instead of reversing the ring and pinion to make the rear turn in the 'new' direction, Shay and his cohorts simply installed it upside down as well!

With the oil pan on the top of the engine, it had to be converted to a dry sump system. Channels were installed around the inside of the oil pan and oil galleys were plugged and rerouted to collect oil for a sump pump to send the oil back to an oil tank mounted to the firewall.  From there the stock Ford oil pump moved engine oil to lubricate the engine.  Despite this Rube Goldberg design, there were no problems with fouled spark plugs.  A common aircraft carburetor fed fuel to the former exhaust ports, now intake ports. The new exhaust ports required a 'one of a kind' exhaust system from the bottom of the engine bay.  The ground clearance of only a few inches helped the handling and the standard V8-60 overheating problem was miraculously cured!

Buddy Shay ran the car at Lakeside through 1940-1941, but in 1942 took over the Paul 'Pappy' Headrick Offy and his brother Vic drove Buddy's famous #36.  Vic broke his right leg in a motorcycle accident in June, 1942, but decided he wanted to run the final race at Lakeside on July 4, 1942 before the government ban on auto racing took effect.  If you have an upside-down engine, hooking up a left-foot throttle shouldn't be a big deal, right?  Vic Schey hit the fence, flipped the #36, and suffered injuries, which proved fatal two days later. 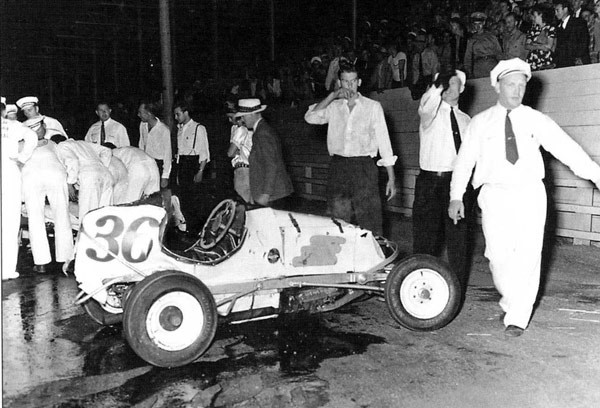