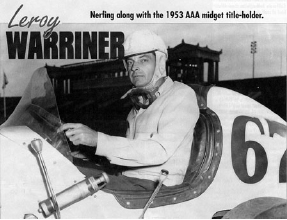 Robert Fairfax Higman of Romney, IN took his first step toward a lifetime association with the “mighty midgets” in 1955 when he purchased the former John Ramp K-K Offy midget #67 which carried Leroy Warriner to the 1953 AAA national midget championship. Higman was swayed to the former Ramp car when Warriner offered to include his services with the deal. Warriner scored three USAC midget wins for Higman, 2-11-56 indoors at Grand Rapids, MI Stadium in the third ever USAC event, 8-3- 56 at the Cincinnati Race Bowl, and 3-16-57 at Fort Pierce, FL Speedway. 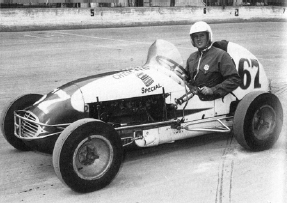 For the next five seasons Higman's #67 attracted some of the best midget chauffeurs in the country. A.J. Foyt scored twice for Higman, solidifying a driver-owner and personal relationship which lasted a lifetime, first in a 50-lapper at Ohio's Kil-Kare Speedway on 9-11-57 and again in another 50-lap feature at Anderson, IN's Sun Valley Speedway on 6/30/61. "Cactus" Jack Turner won for Higman at the Sportsdrome in Jeffersonville, IN on 7-18-58. Gene Force put the Higman #67 into victory lane on 6-6-59 at Detroit's Motor City Speedway, while Bob McLean turned the trick at Grand Rapids, MI, Speedrome on 7/23/59. Gene Hartley recorded a single victory in a 100-lapper at Cleveland's Cloverleaf Speedway on 7/3/61 while Bob Wente proved to be the most prolific winner for Higman with triumphs 6-6-59 at the Grand Rapids, MI Speedrome, 6-22-60 at Painesville, OH Speedway, 6-24-60 at Columbus, OH, Motor Speedway, and finally on 1-14-61 in a 50-lapper indoors at the Chicago Amphitheater.

During Higman's tenure with the midgets, he became familiar with the 110 cu. in. version of the famous Offenhauser engine by servicing his own midget's power plant. His reputation as both and engine and chassis man brought him employment for eleven years at the Speedway: 1960 for driver-owner Bill Homeier, 1961 and 1962 with H.A. Chapman and Art Sims (drivers Don Freeland and Dick Rathmann), 1963-1965 with Gil Morcroft (for Bobby Grim, '63, and Bob Wente in '64 & '65), 1966 with owner Myron Caves and driver Mike McGreevy, 1967 with Al Miller, 1968 with Chuck Hulse, 1969 with Jigger Sirois, and in 1970 with Arnie Knepper.

During the 1960's Higman kept busy beyond the Indy ‘500' by building and servicing midgets for a variety of midget owners. Many of his customers left Higman in charge of racing their cars, calling the shots at the track and even hiring the drivers.

By 1974 Bob Higman had a chassis design in his head and proceeded to build four sister-cars, each with an owner pre-determined. Higman's experience on the entire USAC midget circuit over the past nineteen seasons gave him an excellent perspective of the diversity required to compete on tracks from the 1/10 mile concrete indoor micro-ovals to the sweeping
mile speedways.

Although Higman's creations were a bit bulbous and may not have displayed the beautiful aircraft quality heli-arc fabrication of the sleek Don Edmunds cars of the day, all of Higman's four cars met with tremendous success. The Dan Pool #9 on display at the EARHS showroom won 11 USAC main events, including three significant eastern victories. 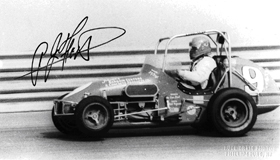 A.J. Foyt reunited with Bob Higman to drive the Dan Pool midget on Pocono's ľ mile for the USAC World Series of Auto Racing on 10-20-74 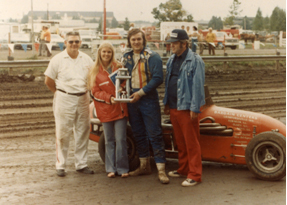 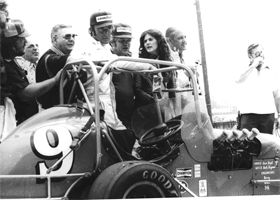 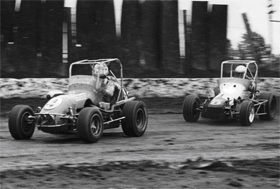 Dana Carter drove the Dan Pool #9 to victory in the only USAC midget race ever run at the famed Syracuse , NY mile on 8-30-75, defeating Leigh Earnshaw, John Hubbard, Bob Dempsey, Ken Nichols, Richard Powell, Jerry Weeks, Wally White, Paul Weisel, and Billy Hughes in the 50-lap affair. Dana Carter also recorded USAC wins in the Pool #9 indoors at the State Fair Coliseum, Indianapolis , IN on 1-25-75, at the Lake Geneva , WI Speed Center on 6-1-75 and at the Champaign-Urbana, IL Fairgrounds on 6-7-75 to place second in the 1975 USAC midget national points chase.

Steve Lotshaw won his first USAC main event in the Pool #9 indoors at the Memorial Coliseum, Ft. Wayne , IN on 1-4-76. Later that year Bill Vukovich, Jr. drove the Pool #9 to win on the mile and one half layout at the Trenton, NJ International Speedway in a 50-mile, 34-lap main event on 8-14-76 over Billy Englehart, Doug Craig, Steve Lotshaw, and Greg Staab. Pancho Carter drove the Pool #9 in 1977, notching twin 50-lap USAC events on the hi-banks at Salem , IN on 5-30-77.

In the final USAC midget event ever contested at the famed Reading, PA Fairgrounds, Arizona driver, Ron Shuman scored a convincing win in the televised 40-lapper on 7-4-78. Trailing the Pool #9 at the checkers were Johnny Parsons, Jr., Mel Kenyon, Steve Lotshaw, and Rich Vogler. Shuman added another 40-lap USAC feature win at the wheel of the Pool #9 at Kokomo , IN on 8-23-78. 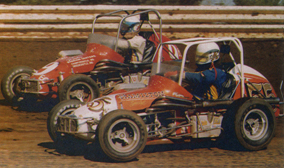 At the end of the 1979 season, the Pool #9 was sold, brokered by Bob Higman to New Yorker Frank Filocamo for competition with the Super Midget Racing Club in 1980. All went well until a late-1982 season crash at Fonda , NY bent the chassis and front axle on the car. Frank arrived at Weisel Racing Equipment in the fall of '82 looking for a new chassis with body mounted, all radius rods, hub carriers, bumpers and nerfs, etc.

Fabricator Jimmy Rothenberger's heart sank just a little when Frank pointed to the just completed chassis, body, with all mounts, bumpers and nerfs he and Paul Weisel had planned to campaign with ARDC the following season. Instead of being three months ahead of schedule for the up-coming season, Jimmy went back to work with straight tubing and an empty frame jig, now two months BEHIND schedule. 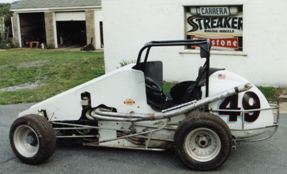 Frank continued to campaign his new Rothenberger car until the summer of 1991, when he again contacted Weisel Racing Equipment, this time to sell his midget in advance of retiring from driving. Weisel bought the car and trailer, optimistically hoping to return to ARDC competition when his Firestone race tire business would permit.

A late summer phone call from Filocamo offering “the bent chassis, front axle, radius rods, with the original body, etc.” resulted in a trip to Frank's storage facility on Staten Island . When the door to the overseas container opened, Weisel noted immediately the signature half bars on the front and rear of the chassis reposing in storage and asked, “That's a Higman car, isn't it?” Frank replied “Yes.” The following, “Which one?” question had Frank confirm it was the Pool car. When the hopeful response, “And all the running gear from the car I bought from you is originally from this chassis?” produced another “Yes.”, the restoration was on. 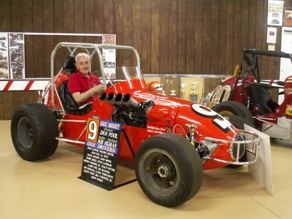 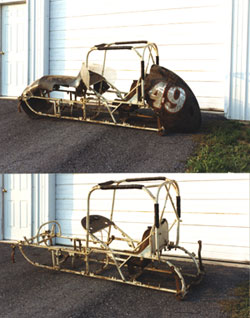 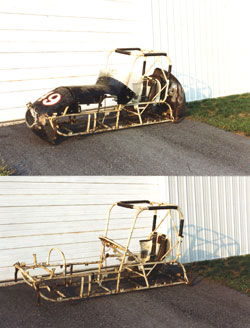 The Bob Higman-built former Dan Pool #9 as it arrived in Orefield, PA for restoration in September, 1991

The restored Bob Higman-built, Dan Pool #9 is currently on display at the EARHS showroom. The car's dash has been autographed by all who drove the car in USAC competition (with the exception of Dana Carter and Clark Templeman who had pre-deceased the restoration) and the original Bob Higman-built Chevy Cosworth engine is in place. Paul Weisel owns the car and was assisted in its restoration by Jimmy Rothenberger, Ron Dunstan, Pete Trumbauer, and Ron Eichner. Bruce Craig and Bob Higman provided historical photos and documents for the restoration. Jimmy Seidel freshened the Cosworth engine, while Dave Brady restored the upholstery, Reliable Auto Body painted the chassis and body, and Guenther Signs recreated the lettering.