One of the highlights of membership in an auto racing historical society is the opportunity to meet some of the veterans of the sport and to have the opportunity to interact with them to experience the auto racing world as they knew it. At EARHS we are fortunate to have in our membership ranks some true pioneers of both local and national racing. We were saddened to learn of the passing on August 25, 2010 of EARHS member and pioneer drag racer, Ed Kowalski, of Reading, PA.

Although Ed was first attracted to the stock cars at Sanatoga Speedway in Pottstown, PA in the early 1950s, he became a competitor at many local drag racing venues in the mid-1950s, including his home track at Maple Grove Raceway in Mohnton, PA. He was the owner / operator of the Ed Kowalski Speed Shops in Reading, PA from 1958 to 1965 with three locations at 9 th & Union Streets, on River Road, and another on Rt. 422. 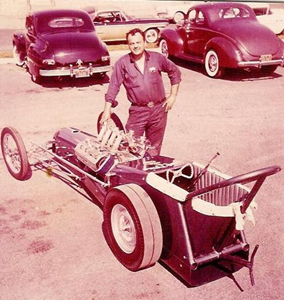 Ed Kowalski built one of the first slingshot dragsters in the area in his Reading, PA speed shop. 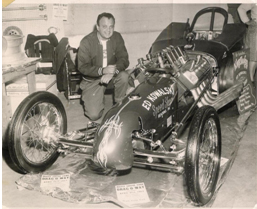 As Ed Kowalski's prowess on the dragstrips progressed, he moved from his chopped and channeled Model A Chevy powered Ford coupe to full race slingshot dragsters, beginning in the A / Fuel Dragster class and eventually moving on to AA / Fuel Dragster competition with many of the nationally-known stars of the day, including long-time friend and competitor, Don ‘Big Daddy' Garlits. Ed's quickest run in AA/FD competition was 7.59 seconds, 202 mph, set in 1965.

After the U.S. Nationals at Indy in 1965, Ed retired from the top level of the sport of drag racing when costs to campaign a competitive fuel dragster grew well beyond amounts which could be undertaken by the individual enthusiast and vaulted into the ‘corporate sponsorship level'. Even after Ed's speed shop closed in 1965, the Kowalski name remained linked to the local racing community.

Ed gets E.J. up to starting speed for his world land speed record run on the Bonneville, UT salt flats.

As his son, E.J., picked up the family banner with his Kowalski Kustoms shop, Ed returned to the world of custom cars, chopped coupes, and straight-line racing in the form of land speed record attempts on the salt flats at Bonneville, UT.

On August 10, 2010, Ed and E.J. capped twenty-two years of competition at Bonneville when E.J. set a world land speed record over the measured mile of 163.553 mph for an unblown flat-head Ford powered roadster. 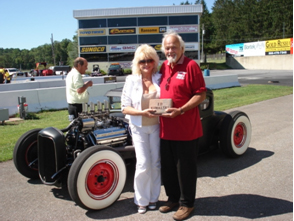 Ed and Linda Vaughn celebrate Ed's induction into the Maple Grove Walk of Fame in 2008. They'd been meeting like this for fifty years.


Ed Kowalski died of natural causes on August 25 th , just three days after his final appearance in victory lane at Manassas, VA, where he was presented a plaque to commemorate his ‘Top Eliminator' win on July 28, 1957 and less than a month after his son, E.J., put the Kowalski name into the record books at Bonneville. Ed's enthusiasm for the sport he loved will be missed.