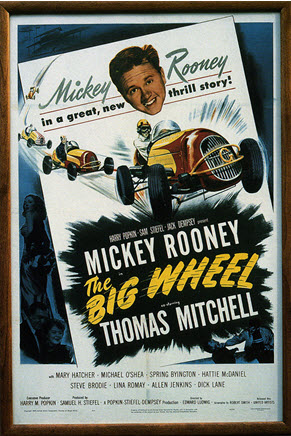 Actor Mickey Rooney died on April 6, 2014 at the age of 93. Among Mr. Rooney's film credits is a 1949 independent production by Samuel H. Stiefel made for United Artists titled, 'The Big Wheel'. In his first film after leaving MGM, Rooney plays 'Billy Coy', a young man determined to follow in his father’s footsteps and become a race driver.

The film was a success in theaters across the nation and is valued today for the midget sequences filmed at Carrell Speedway in Gardena, CA. Mickey Rooney was always gracious to racers throughout his life, as the film created a bond with racers he always respected.

Long Islander, Warren Smith, currently owns the Offy midget which appeared as #75, 'Six Bits', in the film. The car has often been on display in the lobby of dinner theater venues on Long Island where Mickey Rooney was appearing and the Smiths were always guests of the actor.

One young theater patron from Long Island with a burning desire to become a race driver took the name 'Coy' for his on-track name. After years of developing his driving skills, Johnny 'Coy' became the 1968, 1969, 1971, and 1972 ARDC champion. Mickey Rooney has always held a special place with midget racers from the 1950s and beyond.